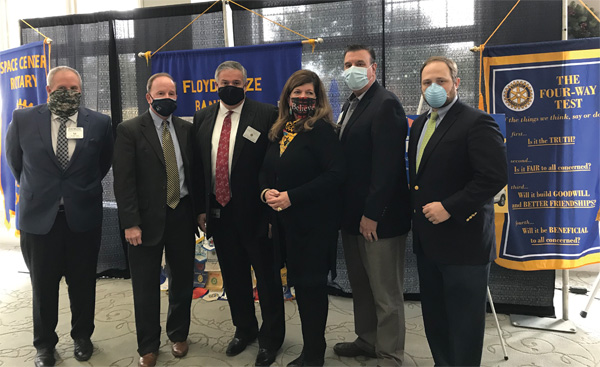 CLEAR CREEK ISD Superintendent Dr. Greg Smith was honored at a number of farewell events as he prepared to retire this past Dec. 31.

Clear Creek Education Foundation was among the first, hosting a virtual “Roast & Toast” Nov. 5 via Facebook Live. Others honoring him included the Clear Lake Area Chamber and Space Center Rotary.

The CCEF roasters, handpicked by Dr. Smith and including Dr. Laura DuPont, Dr. Glenn Freedman and Gail Love, all took turns “Roasting” Dr. Smith with many fun memories and jokes throughout his 12 years in the district. He, of course, had a chance to rebut and the event concluded with a champagne toast, sponsored by Ron Carter Cadillac Hyundai, to honor all his accomplishments and wish him the very best moving forward. More than $90,000 was raised during this virtual event to support innovative programs in the Clear Creek Independent School District.

“It was such an honor to pay tribute to Dr. Smith who so willingly, once again, supported the Foundation’s efforts to raise funds! He’s such a good sport, which made this event so entertaining, meaningful and worthwhile,” CCEF Chairman Katy Bastedo said.

Starting a few days prior to the virtual event, over 23 specialty baskets were available for bidding online that were personally designed and created by teachers and staff at CCISD schools in support of CCEF. Guests registered on the online bidding platform and had fun bidding against their friends virtually. The big component of this was a 2003 50th Anniversary Edition Corvette that was generously donated to CCEF by Board Member Mickey Wooten. With just over 13,000 miles and in pristine condition, CCEF sold 500 raffle tickets at $100 each raising $50,000!  This is the largest raffle in Foundation history! The winner of the Corvette was drawn on Facebook Live immediately following the Roast & Toast Event.

“So many in our community stepped up to support the Foundation and raise the funding needed to support CCISD programs for students and teachers,” CCEF Executive Director Deborah Laine said. “We are truly blessed and most appreciative to everyone who played a part in this success.” The event was planned by an 11 person volunteer committee that included CCEF Community Marketing and Events Manager Kelsey McNeil and committee members Joyce Abbey, CCEF Chairman Katy Bastedo, Traci Dvorak, Roy Green, Carl Joiner, Greg Ploss, Jill Reason, Chris Rylant, Mary Ann Shallberg and CCEF Executive Director Deborah Laine.

SPACE CENTER ROTARY members wanted to say thank you to beloved member Greg Smith for all his hard work on various Rotary projects through the years as he retired as superintendent of CCISD, so they turned their Rotary luncheon at Bay Oaks Country Club into a surprise celebration that he won’t soon forget.

Rotary District Governor Scott Rainey added, “This is a guy whose heart is as big as any stadium and his compassion for people is unsurpassed.”

Fortunately, Greg and Kathy plan to continue being a part of the Bay Area Houston community as he will become executive director of the Fast Growth School Coalition, which advocates for fast growing school districts in Texas. 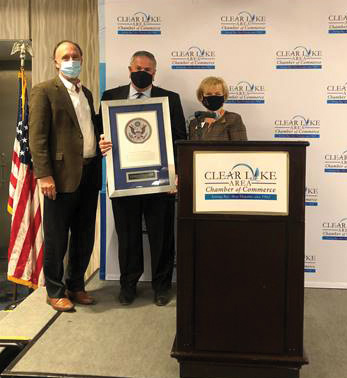 Clear Lake Area Chamber President Cindy DeWease, right, Chamber Chairman Robert Davee, left, thank retiring CCISD Superintendent Dr. Greg Smith for his many years of service to the community at a luncheon in his honor at the NASA/Clear Lake Hilton.

CLEAR LAKE CHAMBER members also honored Dr. Greg Smith at a luncheon in the ballroom of the NASA/Clear Lake Hilton with dozens arriving in masks to thank him for his many years of service and one after another speaker telling how he had earned a special place in the heart of this community. 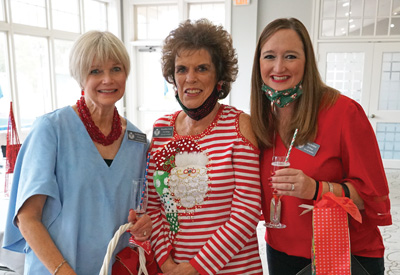 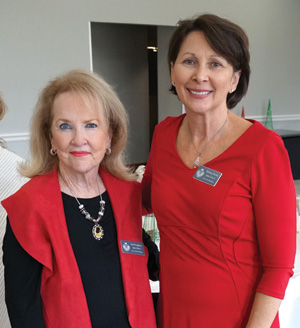 THERE WERE smiles aplenty at Bay Oaks Country Club as Clear Lake Area Panhellenic members gathered for their annual Holiday Party, as many had not seen each other in weeks. Just ask Amy Kershner, Diane Overman, Beverly Stroud, Demerle Monks, Annette Dwyer and Kathryn Vernau.

Chairman Sue Ellen Jennings couldn’t stop smiling as she greeted one after another following a long stretch of staying home to avoid the virus. All wore masks but removed them briefly to sample the refreshments or to pose for a photo. 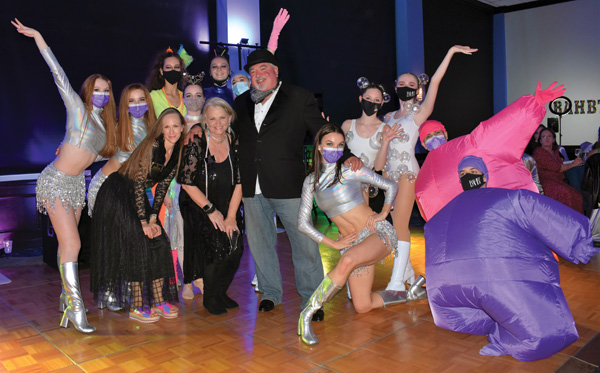 IT USED TO BE called Breakfast with the Sugar Plum Fairy, when some 500 youngsters and their parents would gather in the South Shore Harbour Resort Crystal Ballroom to have breakfast as Clara, and all the cast members would mingle with the crowd. Both parents and kiddos would arrive in their fancy outfits and watch the program put on by the Bay Area Houston Ballet & Theatre’s upcoming Nutcracker cast.

This year, because of the pandemic protocols, there were six events instead of one.

Executive Director Jill Reason explains how it all worked this year. The fun began on Friday, she said, with Dinner with Clara in the Reef Restaurant, followed by a special treat from the Sugar Plum Fairy for those who had a hotel room. Next morning, the usual total of 500 had to be cut in half, so the Sugar Plum Breakfast had an audience of 250. Another 250 were invited to tea that afternoon, followed by the After Party for adults Saturday night, with everyone – all wearing big smiles — finally saying goodbye at still another tea for 250 on Sunday.

ANN WISMER and TJ Aulds were the big winners in the Lunar Rendezvous Festival Opportunity Drawing in December. Ann, a former Lunar Rendezvous Advisory Board chairman and a former festival chairman, won Drawing I, which was a Christmas tree decorated with gift cards worth more than $2,000 and donated by the Festival staff, board members and members of both the Big Court and the Little Court.

TJ won Drawing II, an in-store shopping spree at Lewis Jewelers in Webster, which donated the $1,000 prize. TJ is well known in the area for his popular Show, I-45.