THE ROTARY Space Gala is always one of the grandest nights of the year for the space community, and this year was no exception as a black tie crowd of some 800 toasted the achievements of 2012.

And, saluted a very special lady, honoree Kay Bailey Hutchison – the former senator from Texas who has done so much for NASA and the Johnson Space Center.

“What are we going to do without her?” was the question on most everyone’s lips as they recalled battle after battle she waged and won for the space industry.

NASA Administrator Charles Bolden jetted down from Washington to see her presented the National Space Trophy, as did Congressmen Pete Olson, while former NASA Administrator Michael Griffin and his wife, Rebecca, came up from Huntsville, Ala. 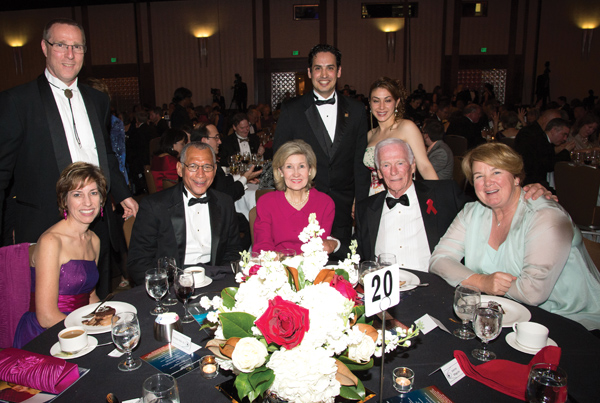 Past National Space Trophy winner Eugene Kranz and his wife, Marta, join the crowd at the Rotary Space Gala at the Downtown Houston Hyatt Regency Hotel.

The Wilsons were pleasantly shocked when JSC engineer Ven Feng’s name was called out as one of the Stellar Award winners. Pat had taught Ven when he was in the second grade at Ed White Elementary in El Lago and had lost track of him and his wife, Dorothea, over the years.

“I was thrilled to be at the banquet and hear his name called–a great surprise!. Wendell always said that one day Ven would be an engineer. Even as a second grader he would ride his bike in Clear Lake Forest to see our home being built, so we called him the “inspector.” Can you imagine a second grader being so interested in that?”

What an exciting get-together that was!

TWO WELL KNOWN Bay Area faces found themselves being honored recently as they marked a couple of special birthdays.

The first was in Kemah when former Councilwoman Kelly Williams hosted a houseful of friends to help husband, Paul, celebrate his big 5-0.

A few days later, several friends of long-time community volunteer Martha Ferebee were on hand to help her celebrate her 75th birthday.

SEVERAL LUCKY Clear Creek ISD seniors will be heading off to college with $16,000 scholarships provided by the Houston Endowment.

They were among the 320 Houston area students selected by the Houston Rotary Club as Jones Scholars with selection based on academic achievement, leadership skills, economic need, community service and character.