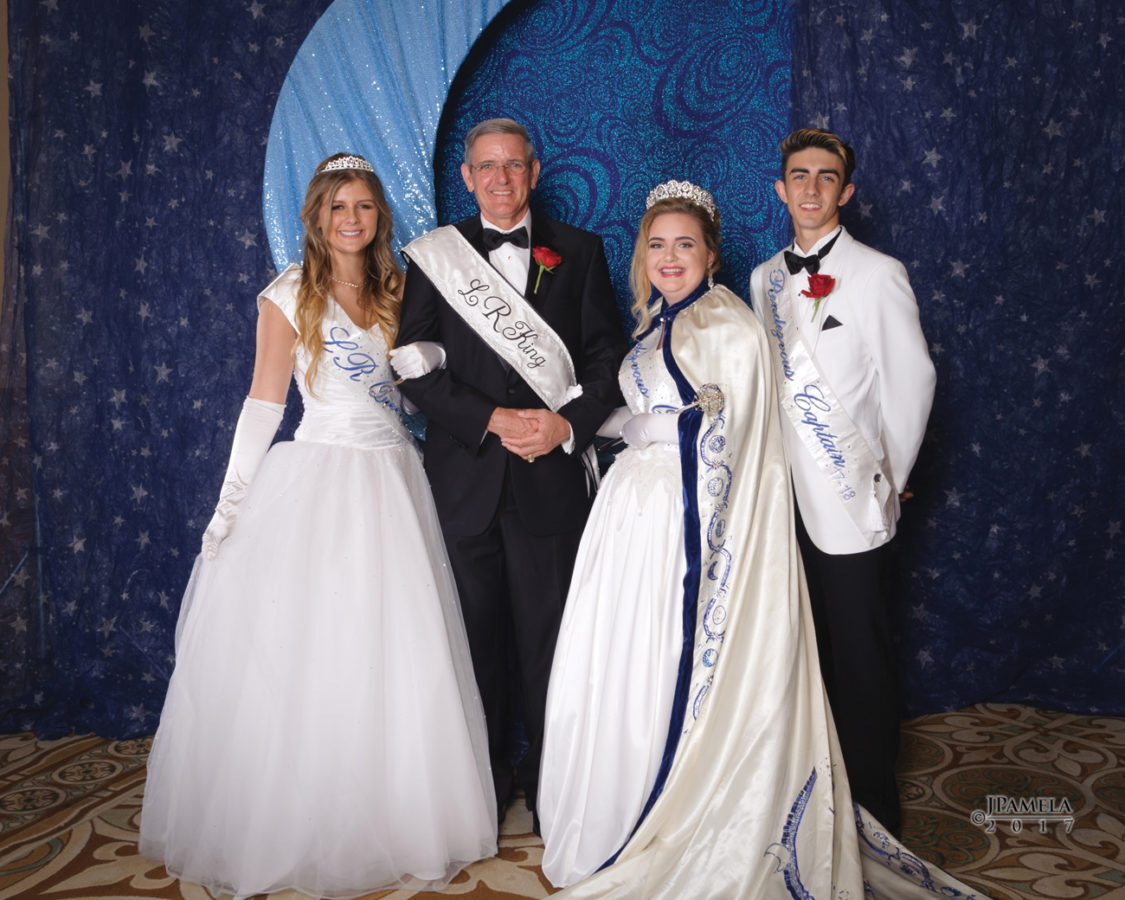 The Lunar Rendezvous’ 2018 Royal Court stands for a photo at the Coronation Ball in Galveston. They are, center, King William McArthur and Queen Serina Weathers, with Capt. Ian Schaider, right, and Queen Alternate Katherine Nifong.

A former Little Lady in Waiting, she is the daughter of Brett and Kimberley Weathers of Clear Lake and was sponsored by Sandy Carney of The Clotheshorse Boutique in League City.

After all the princesses, lieutenants, little ladies and page were introduced by the emcee, astronaut Shane Kimbrough, she was crowned by the 2017 queen, Madelyn Claire Emilia Chidester, and then danced the first dance with Festival King Bill McArthur, who just retired from NASA’s Astronaut Corps.

Queen Alternate is Katherine Josefine Nifong, daughter of Craig and Wendy Nifong and a senior at Clear Creek High School. Katie was sponsored by her grandparents, Richard and Helga Rietz and escorted by Lt. John Raymond Mahon, son of Kelly Mahon and John Mahon. 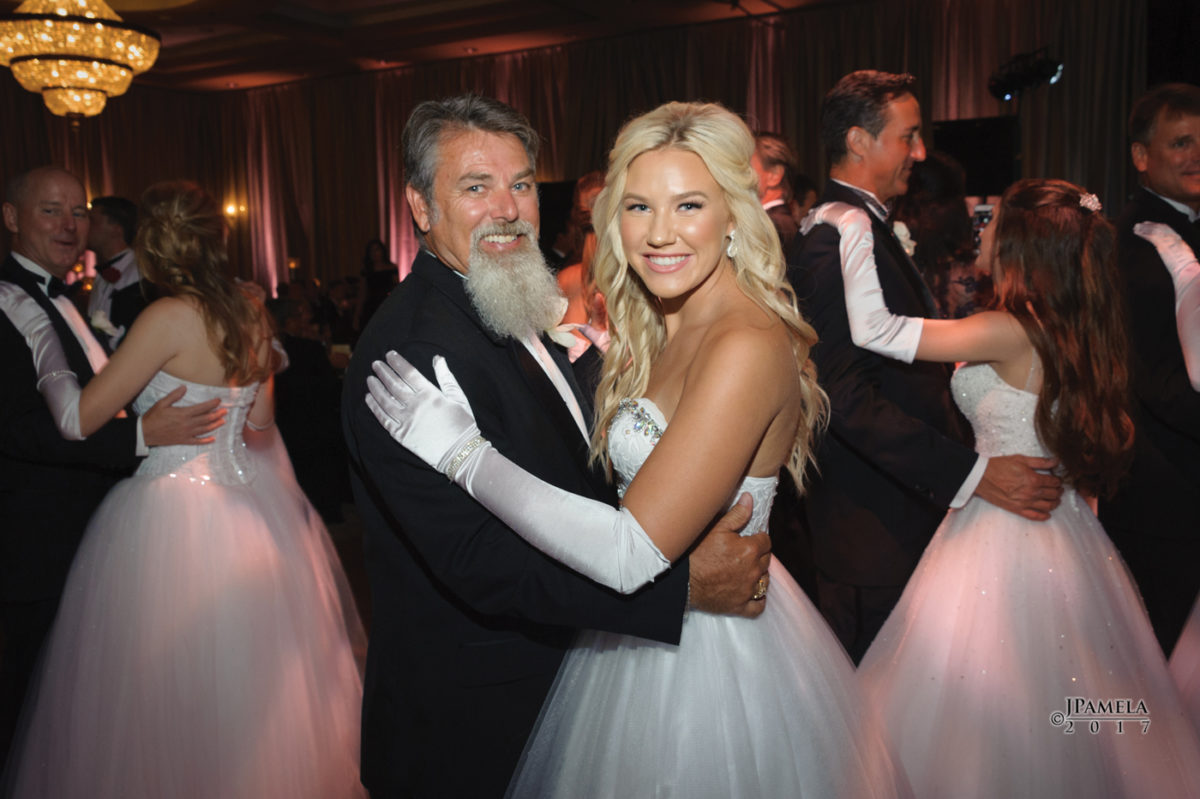 Troy Harless and his daughter, Princess Tory Harless, enjoy themselves at the Lunar Rendezvous Ball.

This year’s captain is Ian Schaider, son of Paul and Elaine Schaider and a rising senior at Lutheran South Academy. He was escorted by Princess Madeleine Barlow, daughter of Mark and Eileen Barlow and was sponsored by Charlie Pfeiffer of Pfeiffer and Son.

Glancing around, you might have also spotted Julie and Tim Rainey, Todd and Suzanne Zerecheck, Dave and Carol Bergman Reynolds, Krista Williamson, Kathy Dooley, Jennifer and Richard Simmons, Linda Byrd, Elizabeth Byrd Olin, Wendy Drapela, Ange Mertens, Lisa and Eric Tanzberger and Lizzie Nifong, a former queen alternate who was there to see her sister introduced as the 2018 queen alternate. 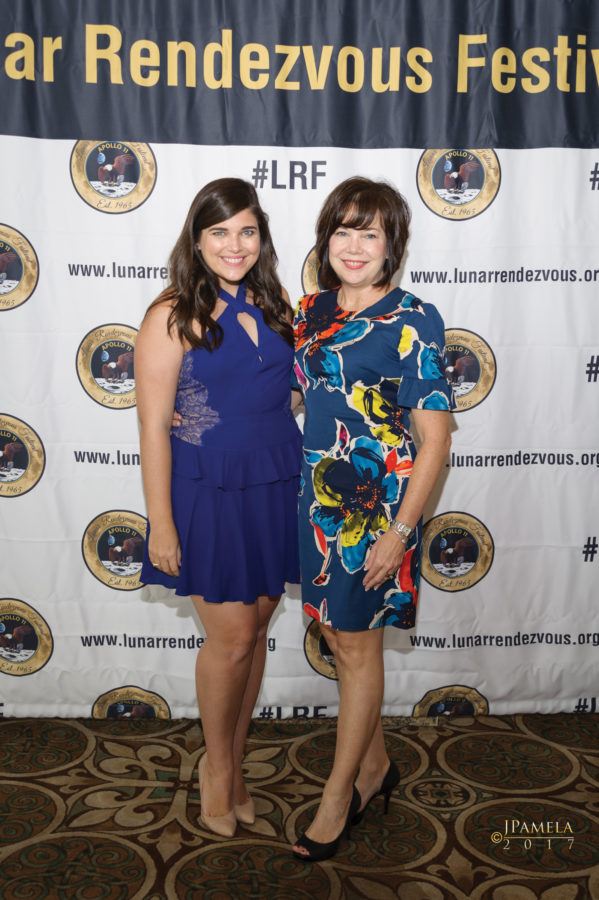 Fashion Show a fun time for all

THE LUNAR Rendezvous Fashion Show is always one of the biggest events of the summer, so Co-Chairmen Janis Blizzard and her daughter, Savannah McMahon, wanted to make it a memorable one, picking “Fly Me to the Moon” as the theme and inking Lenny Matuszewski Jr. as the producer.

Besides seeing friends one hasn’t seen all summer, it’s always fun to see all the princesses, lieutenants, little ladies and the little page come down the runway with their proud moms – among them Kate Foyt and Linda DeMasie, both with daughters named Lauren; Renee Ditta with her third princess daughter, Macey; Ellen Chuoke with daughter, Annie; Debbie Kropp with daughter Jamie; Julie Rainey and daughter Kayla; Wendy Shaw and daughter Sophia; and Krista Williamson with twins Marie and Marlie — all with ties to Lunar Rendezvous.

Also adding pizzazz to the show were the dancers from the Bay Area Houston Ballet & Theatre, who always brighten up our events.

Plus, the ladies who put in so many hours working with the princesses and lieutenants – Jill Smitherman and Belinda Schuerich; and the cuties in the little court – Laura Mackay and Amanda Mark, making sure they all knew their places, what to wear and when to show up.