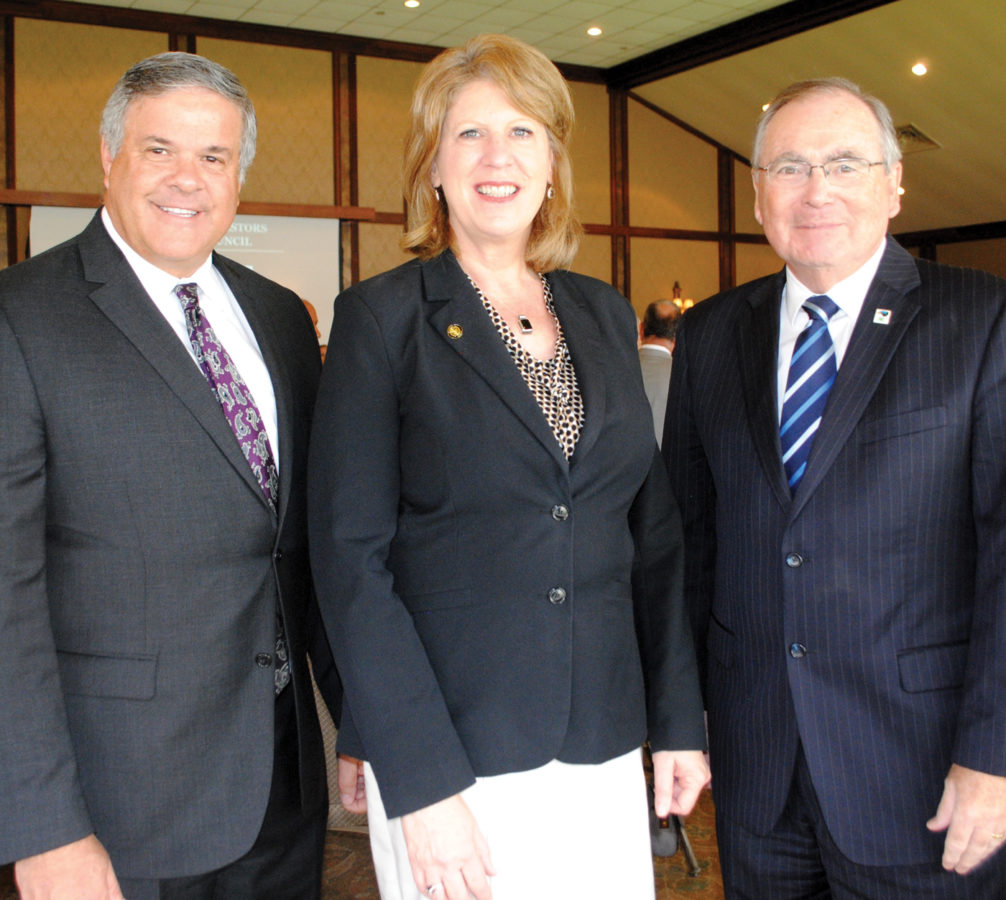 We try not to brag but how many communities have education facilities on a level of those in the Clear Lake Chamber’s membership area?

Not many, we all know, and each year when education officials update the chamber membership, the news just gets better and better.

UH-Clear Lake President Dr. Bill Staples, San Jacinto College Vice Chancellor Teri Crawford and Clear Creek ISD Superintendent Dr. Greg Smith were back for the second year in a row with some of the year’s highlights and what’s ahead at the chamber luncheon at Lakewood Yacht Club.

As he nears retirement, Dr. Staples reported that UHCL’s two new buildings on the Clear Lake campus will open in Fall 2018 with the new classroom building on the Pearland campus to open in Spring 2019, going on to praise Dr. Smith and San Jac President Dr. Brenda Hellyer. “You should be proud to have them heading their respective institutions,” he said.

And, as UHCL thrives as a four-year university and he completes his final year there, he said he got quite a thrill to see the students who initially started the bilingual classes years ago at McWhirter Elementary School – a UHCL/CCISD joint venture — graduate this past June.

Teri Crawford proudly told the crowd that San Jac had recently been awarded a $100,000 prize as it was recognized as a Top Five Community College in the Nation and was a finalist for the third time for the coveted Aspen Prize for Community College Excellence for “achieving strong student success outcomes in learning, marketing and equity.”

And, UHCL is not the only one undergoing new construction. Seven new buildings are underway at San Jac, she said, including a Engineering and Technology Center, a Cosmetology Center and expansion of the Fire House on the South Campus and a classroom building, Welcome Center and Center for Petrochemical, Energy and Technology on the Central Campus with the North Campus getting a Cosmetology and Culinary Center.

Dr. Smith opened his comments by praising Dr. Staples for all his work and noting that he was instrumental in launching and Dual Language Immersion Program at McWhirter Elementary and how proud all were as the first bilingual class graduated. “The program continues to thrive and has expanded to four other schools.”

After noting that a record number of seniors had graduated this past June, and reporting on remodeling work at both Clear Lake and Clear Creek High Schools, he went on to tell of several students who had overcome incredible problems to become a success. “We work to instill a set of core values in our students. To be respectful, trustworthy and understand what it means to roll up your sleeves and give back.”

In his closing remarks, he had some very good news for taxpayers: Instead of a 4.5 cent tax increase for the year because of the recently passed school bond, “due to property value growth, it looks like we will not need to increase the tax rate for the year.”
That brought smiles all around the ballroom.