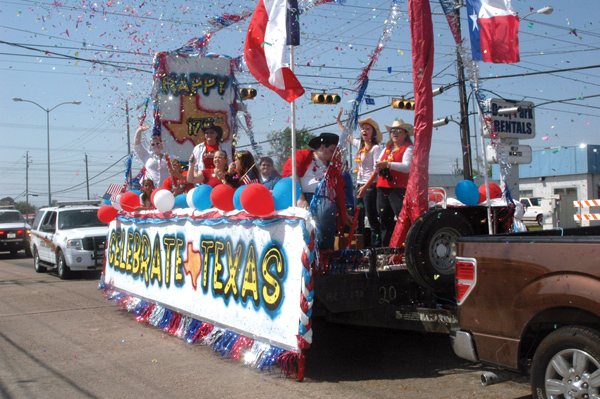 The Birthplace of Texas will host the Totally Texas Festival on April 13. The festival celebrates the Battle of San Jacinto, the decisive 18-minute skirmish that gave the Lone Star State its independence from Mexico.

On April 1, 1836, the Texas Army, led by Gen. Sam Houston ambushed the Santa Ana-led Mexican forces. Although they were outnumbered two-to-one, the Texans swept through the Mexican camp suffering only nine casualties.

General Houston met with Santa Ana in the cabin home of George Moffitt Patrick in what became Deer Park where the initial treaty outlining Mexico’s surrender was drafted.

“From a historical aspect, the festival teaches families about the history of the community, but it also benefits Deer Park economically, bringing visitors in to support local businesses,” said Nicole Garvis, communications coordinator for the Deer Park Chamber of Commerce.

There will be plenty of events, concerts and fun throughout the day at the Jimmy Burke Activity Center, 500 W. San Augustine St. in Deer Park.

April 13 with the Strides for Schools Fun Run sponsored by Shell Deer Park. Registration and packet pick up begins at 7 a.m. with the race starting at 8:15 a.m. The fun run benefits the Deer Park Education Foundation. More information on the fun run can be found at www.shelldpfunrun.com.

The arts and crafts booths open for shoppers at 9 a.m. and remain open until 7 p.m.

New this year is the George Watt Commemorative Chili Cook off, presented by the Deer Park Chamber, the Channelview Senior Citizens and the Smokin 44’s Cooking team. There is $1,800 in prize money for the best beans, chili and people’s choice winners.

Musical entertainment will play throughout the festival beginning at 9:15 a.m.

The parade begins at 11 a.m. with the route starting at Abshier Stadium and ending at the Jimmy Burke Activity Center, where most of the festivities are being held.

The Jimmy Burke Activity Center will be the epicenter for activity. With thousands of festival and fun run participants congregating in one spot, parking options will be scarce at the actual Burke Center site. However, there will be free shuttle services from three large lots around town on Saturday.

Free parking will be available at Clyde Abshier Stadium and Dollar General. A shuttle bus will run from each of the locations to the Jimmy Burke Activity Center. Abshier Stadium is located at 710 W. San Augustine behind Deer Park High School South Campus. The Houston Area Safety Council is located on the corner of Thirteenth Street and Georgia Avenue. Dollar General is located at the intersection of Center and X streets.

For more information on the Totally Texas Festival including a full schedule of events as well as a map of the parade route and applications for the competitions visit the Deer Park Chamber of Commerce website, www.deerpark.org.