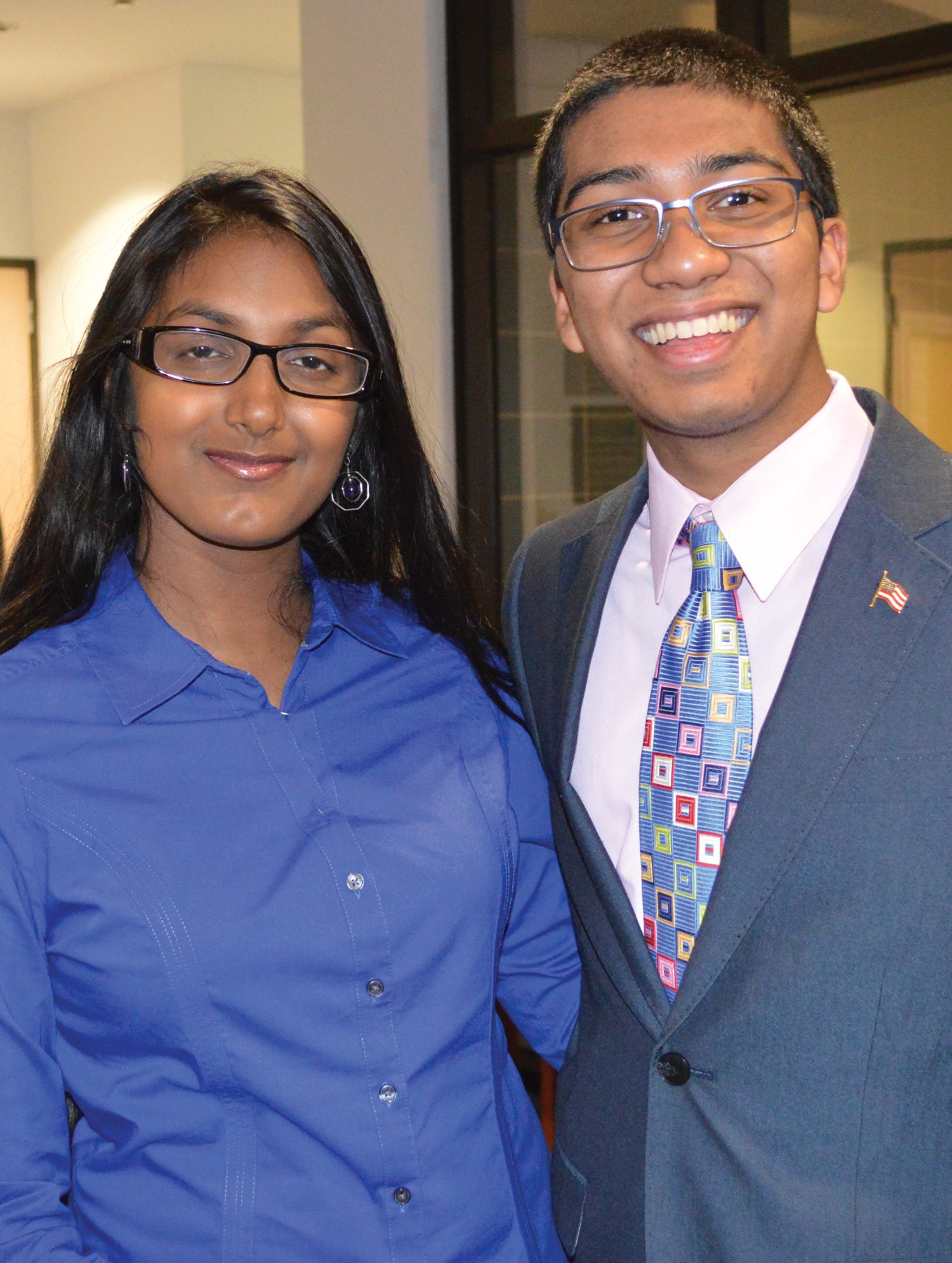 Syamantak Payra and Kavita Selva were honored at the Clear Creek ISD Board of Trustees meeting for their recent wins at the International Science Fair in Phoenix, Ariz. Payra also showed off his most recent achievement, a low-cost electronically-aided knee brace that allows an individual with a weakened leg to walk more naturally and won him the Young Scientist Award at the fair. Payra attends Clear Brook High and Selva is a student at Clear Lake High.

Clear Creek ISD honored one of its brightest young students at the monthly school board meeting, leaving the audience in awe as Clear Brook High junior Syamantak Payra showcased the prize-winning device he invented for a fraction of what similar devices can cost patients.

The low-cost electronically aided device, a knee brace that allows someone with a weakened leg to walk more naturally by actively bending the knee, won him the Intel Young Scientist Award and a $50,000 prize at the International Science Fair in Phoenix, Ariz.

And, he’s such a good speller that he not only won the Texas Spelling Bee, he was a semi-finalist in the National Spelling Bee in 2013 and runnerup in 2014. The son of Pramatha Payra and Sanjukta Ghose of Friendswood, he is also a gifted musician and writer and almost always wears a big smile.

More than 6 million people in the U.S. alone who lack leg muscle function due to illnesses like multiple sclerosis, spinal injury or polio need special devices to help them walk. But because normal walking requires knee-bending, conventional Knee-Ankle-Foot-Orthoses devices can cause health problems such as gait deviations, hip/back pain, joint/muscle damage and the use of excess energy.

For years, there has been no commercially available Knee-Ankle-Foot-Orthoses device that assists in walking by actively bending the knee, until now.

The devices that have been available typically don’t bend at the knee. They’re also expensive, often costing up to $100,000 and patients often need several weeks of training to use them properly.

Syamantak’s solution is both inexpensive and easy to use, CCISD explained. He started with an off-the-shelf brace that only costs about $2,000. To this he added a motor-driven actuator. (That component looks a lot like the shock absorber on a car.) Its motor moves a piston in and out, which flexes the knee. A small computer that clips to the user’s belt or slips into a pocket controls that motor. That computer, in turn, receives signals from a sensor that reports the position of the opposite leg.

Together, all of the parts in Syamantak’s system will add only about $500 to the cost of the starting brace. Plus, the new system can be used with less than an hour of training, the Indian American teen notes. He designed the software in the system’s computer to learn how the patient walks, he explained. That means that the more someone uses it, the better it performs.