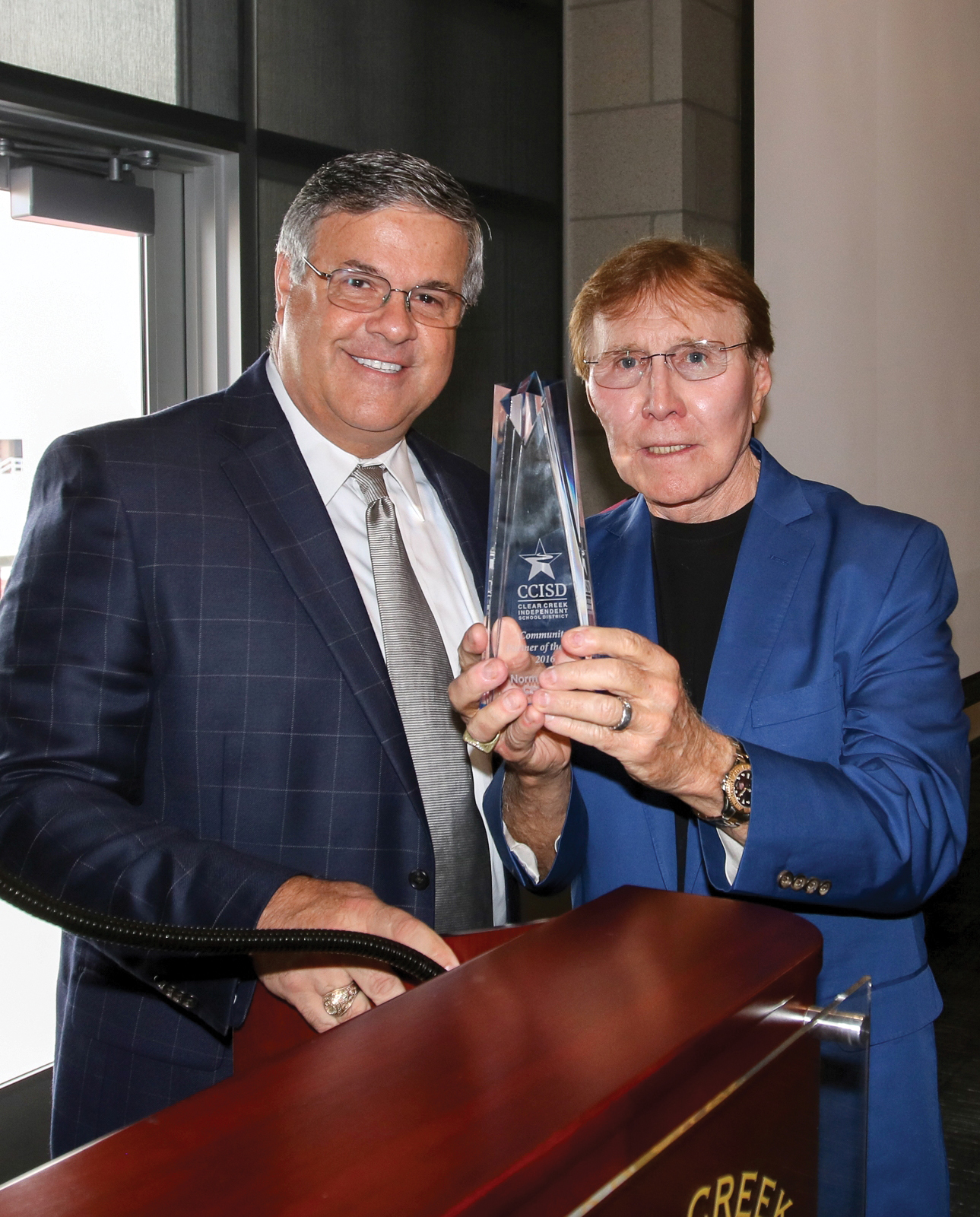 Superintendent Dr. Greg Smith, left, thanks Chevrolet dealer Norman Frede for his many contributions to CCISD as he presents him with the Community Partner of the Year Award at the annual Community Breakfast at Challenger Columbia Stadium.

Against the backdrop of the new Challenger Columbia Stadium, Clear Creek ISD paid tribute to a generous Bay Area community deeply invested in its students and teachers at the 2016 Volunteer & Partnership Breakfast.

A stirring a cappella performance by the Clear Springs Rhythm & Blue Show Choir kicked off the breakfast, earning the singing group a standing ovation from the crowd of more than 200.

Superintendent Dr. Greg Smith presented an informal community impact report to guests detailing a deep and wide range of successful partnerships with the District and schools throughout the year. “Every time you showed up for your reading or mentoring time slot, built an elaborate marching band set, or were the rainbow in a child’s cloudy day, it was noticed,” Dr. Smith said. “But we know that’s not why you do what you do. You do it because you know it makes a difference. I believe it doesn’t take a village, it takes a community.” 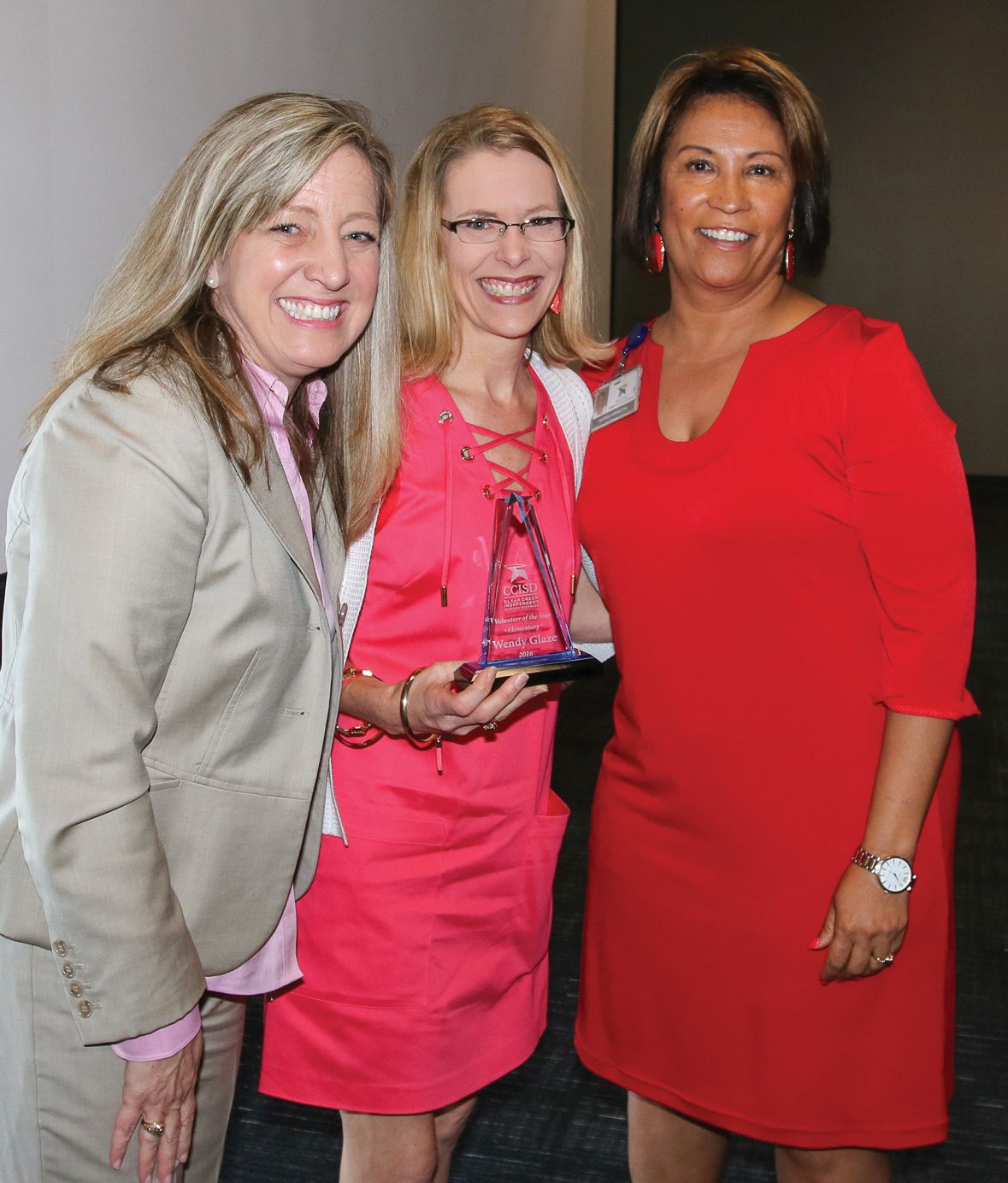 Assistant Superintendent of Elementary Education Holly Hughes, left, and Brookwood Elementary Principal Ann Arrington, right, congratulate Wendy Glaze as she was named Elementary Volunteer of the Year at the breakfast.

The principal of League City Elementary, Xan Wood, shared poignant stories of innovative partner roles over the past year and their positive effects on the students and families of her campus. One such initiative was the success of a multi-partner effort to support economically disadvantaged families.

The League City Rotary Club, Galveston County Food Bank, League City United Methodist Church and dozens of volunteers combined forces to bring a mobile food distribution truck to her campus once a month to provide fresh foods to families in need. The District’s number of economically disadvantaged has increased from 18.6 percent in 2006 to 27 percent in 2015.

For their more than 40 years of steadfast support to the community and neighboring schools, Norman Frede Chevrolet was presented with the Community Partner of the Year award. From sharing its service professionals’ vital expertise with Automotive Technology students, to supporting the District’s elementary physical education programs through its signature Kick for the Kids initiative, “the company’s sites have always been clearly set on the future of our children,” Dr. Smith said. The dealership’s long-time support of the District’s FFA program and Clear Creek Education Foundation were also cited among other impactful contributions. 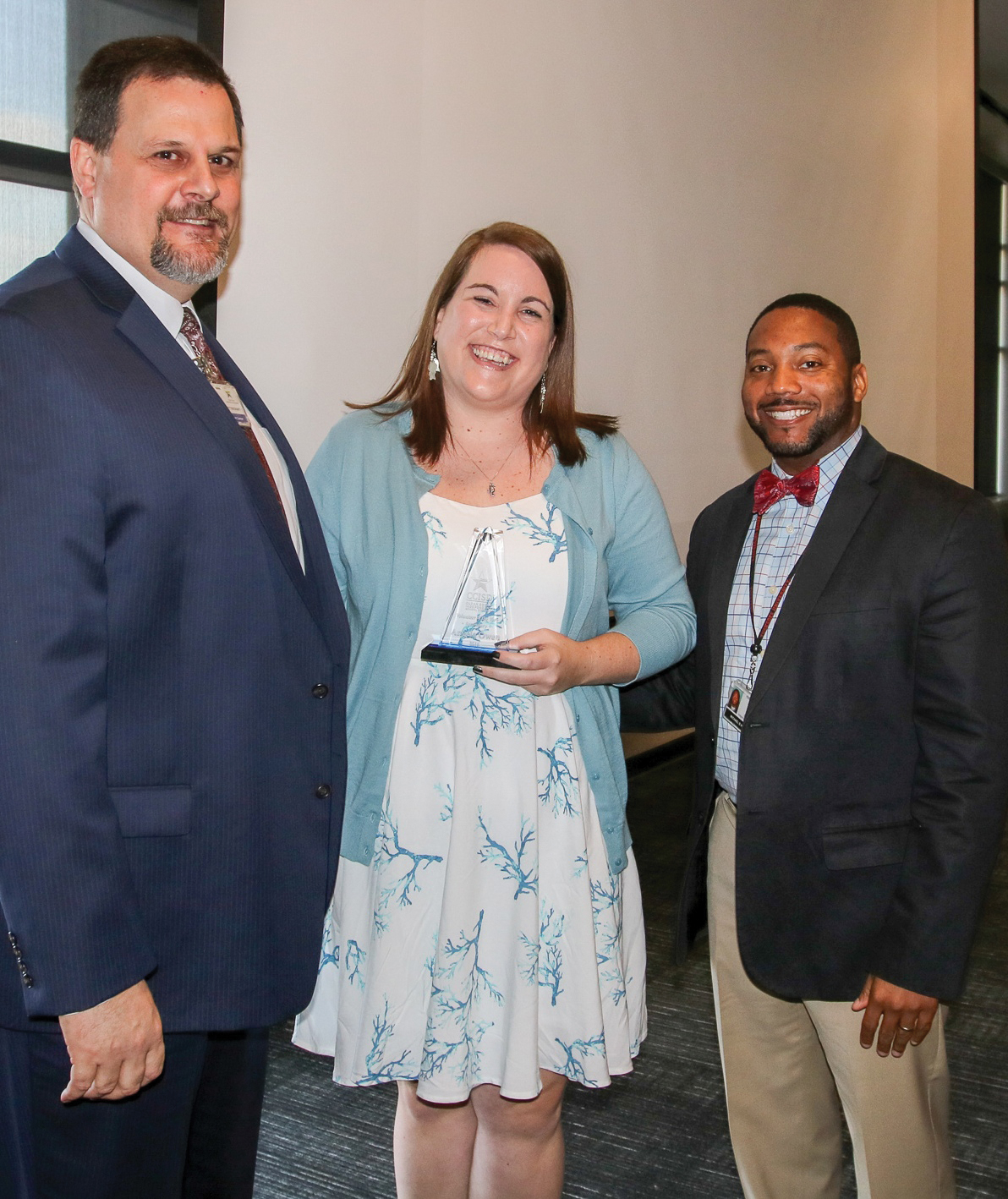 The Elementary and Secondary Volunteers of the Year were then announced from a pool of 44 campus volunteers who were each nominated by the school they primarily support. Assistant Superintendent of Elementary Education Holly Hughes announced Wendy Glaze from Brookwood Elementary as the Elementary Volunteer of the Year for the results she has brought about through her many leadership roles both at the campus and District level.

Her recent involvement in the campus’ Operation Playground brought a state-of-the-art play area to the school, changing the way children play and get exercise.

Assistant Superintendent of Secondary Education Scott Bockart announced Angela Owen as the Secondary Volunteer of the Year representing Clear View High. She was described as someone who truly cares for the kids and the futures they each have in store. Through her work on the Bay Area Alliance for Youth and Families, Teen Leadership Classes, among other efforts, Ms. Owen shares a great deal of time mentoring and teaching students how to become leaders themselves.