CCISD honors community partners, names its Volunteers of the Year 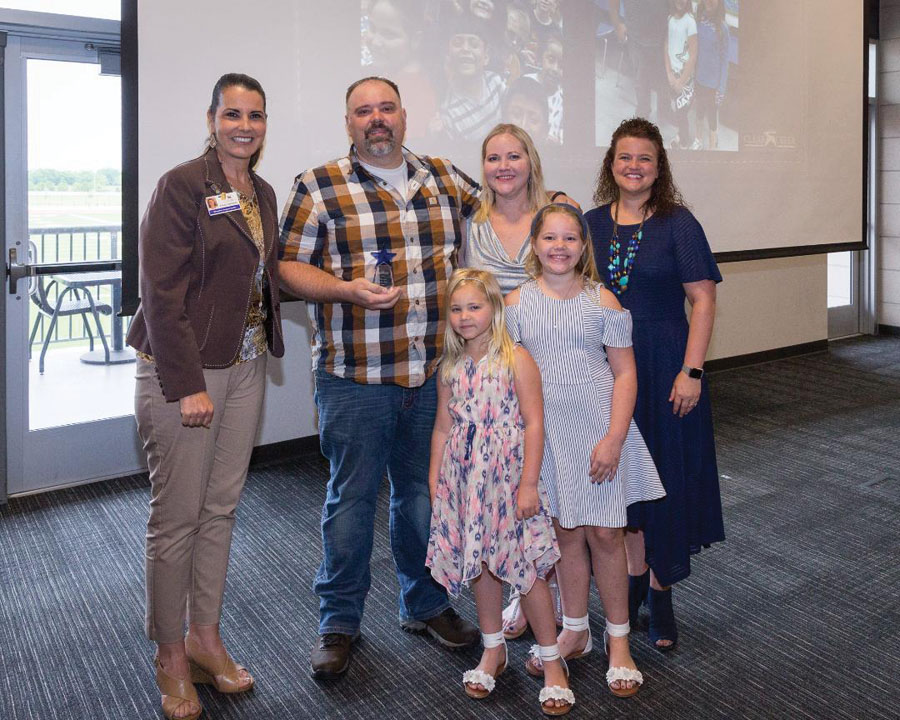 CCISD Assistant Director of Marketing Eva deCardenas, left, and Stewart Elementary Principal Dr. Britani Moses, right, present Brandon Williams with the award for 2019 Elementary Volunteer of the Year. He is joined by his wife, Erin Williams, and daughters, Ally and Avery.

Clear Creek ISD paid tribute to the many community partners and volunteers who were a big part of the success of its students and schools over the past year during a Texas-sized Volunteer and Partnership Roundup.

As the special guests entered the Challenger Columbia Stadium fieldhouse, they were greeted by cattle and their student owners who are members of the CCISD FFA program and represented every chapter in the District. In keeping with the roundup theme of the morning, the Mossman Elementary second grade choir, directed by JoAnn Burke, sang and performed a musical medley of western selections, complete with square dancing to entertain the crowd.

“Our principals and other leaders you see in the room today know that our district – our campuses – would look very different today without your muscle, minds and monetary support,” Superintendent of Schools Dr. Greg Smith said during opening remarks.

70TH YEAR
In a community impact report, Smith traced the history and growth of Clear Creek ISD in this, the District’s 70th anniversary year. He then stepped through the past year’s challenges and successes and directly tied volunteers and partners to many positive outcomes. Smith remembered the Santa Fe and Parkland tragedies and shared how the CCISD community supported the Santa Fe family and rallied around improved crisis prevention and preparedness.

“This effort drew together parents and students, law enforcement and legislators, rallying as one for the sake of student safety,” Smith said.

In announcing Houston Methodist Clear Lake Hospital as the Community Partner of the Year, Smith pointed out that in addition to the nearly 30 years of support of the District’s student athletes through the hospital’s athletic trainers and expertise, Houston Methodist has demonstrated a deep commitment to the mission and expansion of The Leader In Me program at CCISD schools.

“We wanted to deepen our existing partnerships with CCISD and we saw a way to do that through The Leader In Me program,” said Houston Methodist Clear Lake Chief Executive Officer, Dan Newman.“This program changes our community so we are very excited to be a part of something that is so transformative for our students and this community.”

TOP VOLUNTEERS
After announcing the Volunteer of the Year at each campus, the District announced Brandon Williams from Stewart Elementary, and Tim Kropp from Clear View High School as the Elementary and Secondary Volunteers of the Year, respectively.

Williams was hailed for his commitment to support Stewart Elementary student safety over the past year’s significant renovations taking place on that campus. In addition to serving as a Watch D.O.G.S. parent for several years, Williams saw the campus was in need of help during the construction phase and began coming to the school every morning before heading to work to help with student drop off in the car rider line. “His dedication and calm and supporting demeanor has been encouraging for the parents, our staff and students,” said Stewart Principal Dr. Britani Moses. “In fact, sometimes people think he is an employee at our school!”

A Space Center Rotarian, Kropp was described as someone who understands the value of service to the community and leadership development, especially for the students of Clear View High School. Kropp, a former high school Interact member himself, is the Interact Rotarian Sponsor for that campus. Interact clubs bring together Rotarians with young people to develop leadership skills while discovering the power of Service Above Self. The students of Clear View High School benefit immensely from Kropp’s caring involvement in other aspects of student life as well, from providing scholarships and paying for club t-shirts to collecting funds to help make prom memorable for students who may need a little help.

STUDENT GRATEFUL
Clear View High School senior, Jade Brown, made the surprise announcement in front of the crowd of more than 200. “It is because of Mr. Kropp that recently I was able to go to a student conference for NewGen Peacebuilders,” Brown said. “That two-day conference really impacted me. It made me realize that even though we come from different places and backgrounds, we can still work successfully towards a common goal. Without him, I never would have gotten to experience that.”

The morning celebration concluded with Clear Creek Community Council (CCCC) of PTAs President Laura Varley, announcing the campus with the highest number of PTA members, Bauerschlag Elementary. Principal Kelly Chapman accepted the award on behalf of her campus. Varley also announced that the CCCC of PTAs had earned the Diamond Membership Award from the Texas PTA, which is achieved when 100% of a council’s PTAs experience an increase in membership.

The 2019 Volunteer and Partnership Breakfast was made possible by event sponsors Balfour, Photo Texas Photography and T-Shirt Trends. 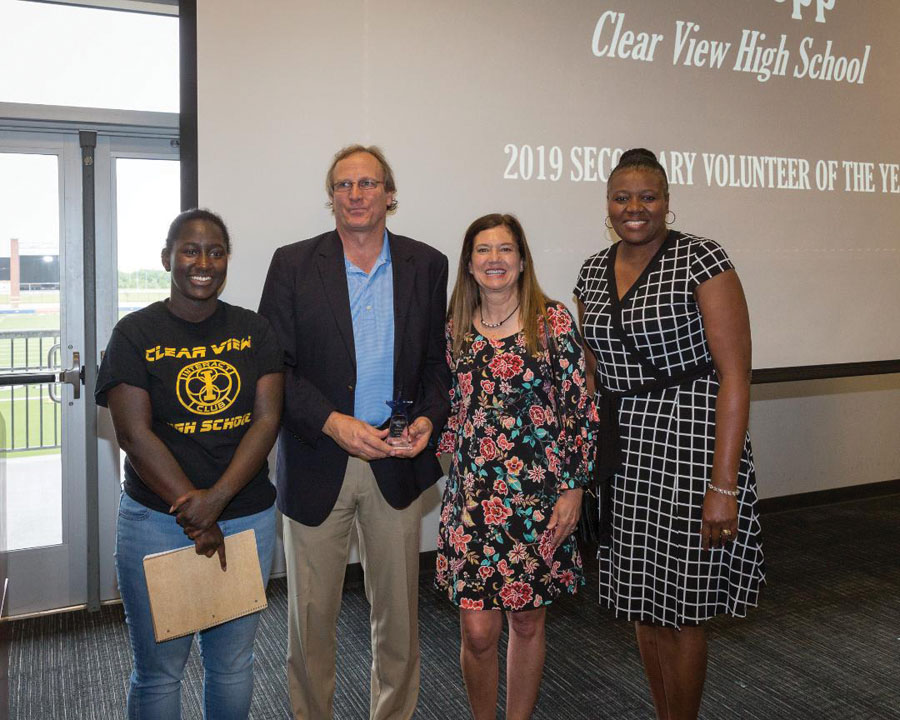 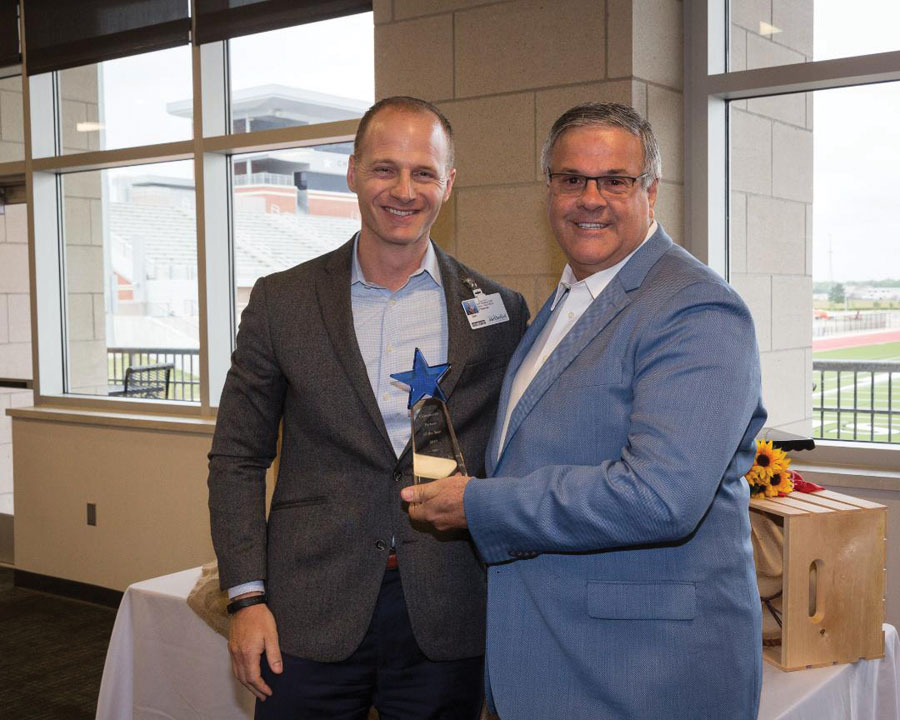