CCISD announces 2016 Citizen of the Year 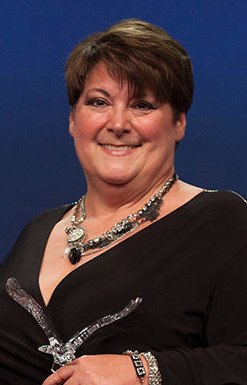 Joyce Abbey to be honored Nov. 5

Each year the Clear Creek School District takes great pride in naming and honoring a Citizen of the Year who has consistently demonstrated a commitment to the district and excellence in public education through their volunteer efforts.

The 2016 Citizen of the Year is Joyce Abbey, who is both a CCISD alumna and known advocate for the advancement of STEM programming in public education.

“Joyce’s service to this district and community is a full circle success story of a Clear Creek High School graduate who takes every opportunity she has to advocate for what a good education can mean to a child,” Superintendent of Schools Dr. Greg Smith said.

As the Citizen of the Year, she will be honored at the Clear Creek Education Foundation’s Gala Saturday, Nov. 5 at South Shore Harbour Resort, along with the Foundation’s selected honorees.

As the SAIC employee communications and external relations director, Abbey is also known for her championing of human spaceflight. She spearheads the Aerospace Teacher Extern Program which equips teachers to connect educational skills with what is happening in the workplace and industry, and the vast number and variety of career options available to students.

The nomination reads in part: “A well-known ‘spark starter,’ Ms. Abbey advocates for support of STEM initiatives to her aerospace, and non-aerospace counterparts alike, rallying both businesses and volunteers onboard to support their local school district and student programs.” Abbey is also visibly dedicated to the greater community through her long-time support of many non-profit programs and organizations including Special Olympics, Hope Village, Feds Feed Families and Help Our Military Endure (HOME), to name a few.

Other awardees to be honored at the 2016 gala, “From Inspiration to Reality” include: