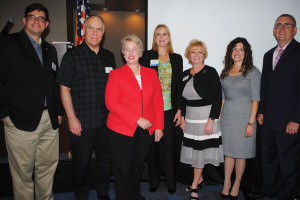 Mayor also wants to save the Dome

Houston Mayor Annise Parker thinks the Astrodome can be repurposed.

“It would be a great place for an indoor amusement park . . . but it’s going to take dollars from the private sector to do it,” she said, speaking at the Clear Lake Area Chamber’s monthly luncheon at the Nassau Bay Hilton.

It’s clear, she added, that Harris County is not interested in putting large amounts of money into the Dome without a major donor from the private sector.

That was one of about a dozen subjects she updated the crowd on, including the need for a change in term limits to two four-year terms.

NASA has exercised an option to extend a contract with Barrios Technology Ltd. of Houston to provide support to International Space Station activities at NASA’s Johnson Space Center in Houston.

The cost-plus-award-fee and incentive-fee contract modification increases the overall value of the contract by $83 million to almost $154.5 million. With the extension, the contract now ends Sept. 30, 2016.

Products and services provided under the current contract support mission and program integration and necessary infrastructure operations functions for the space station. It includes the potential of supporting other NASA programs or projects via task orders.

The Port of Galveston has gotten the OK from its governing board to expand its 90,000-square-foot Cruise Terminal No. 2 by 60,000 square feet to allow for more and larger sailing vessels and for more seating for cruise passengers.

Webber Inc. of Houston was awarded the $11 million contract.

LyondellBasell has announced that Chief Executive Officer James L. Gallogly will retire from the company in early 2015. Gallogly will continue to serve as CEO and chairman of the LyondellBasell management board in the interim to ensure an orderly transition pending the selection of his replacement.

The LyondellBasell supervisory board of directors has formed a committee to choose Gallogly’s successor. 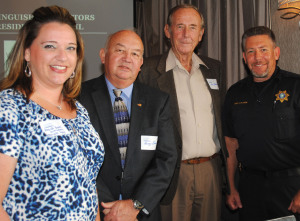 SJC given grant to train mariners

The grant will fund training for 195 mariners from Buffalo Marine Services, G&H Towing Co., Higman Barge Lines Inc., and J.A.M. Distributing. Since the start of the San Jacinto College maritime program in 2010, approximately 2,500 U.S. Coast Guard certificates have been awarded to mariners. Having a local maritime training center saves companies travel expenses. In the past, mariners were sent out of state for similar training.

In the near future, San Jacinto College will expand its maritime training program with the opening of a 45,000-square-foot Maritime Training Center along the Port of Houston.

League City and Pinnacle Development Group have partnered to bring a very unique retailer to League City. Cabela’s Incorporated, the World’s Foremost Outfitter® of hunting, fishing and outdoor gear, announced its plan to build a 72,000 square-foot store in the Pinnacle Park Development at I-45 near Big League Dreams Parkway in League City.

Earl Smith is League City’s new director of engineering. Earl Smith, who has over 27 years of public sector engineering experience and most recently worked as public works director and city engineer for the City of Decatur, Texas, began work Sept. 22.

“I look forward to working with the city staff, elected officials and residents to continue the projects and initiatives that are already established and to discover new opportunities to enhance service to League City’s residents,” he said. As engineering director, he oversees municipal engineering, the city’s capital improvement program, project management, traffic engineering and operations and land development related activities.

“We are pleased to add another talented individual to the city’s staff of professional and experienced employees. We believe Earl has the skills to work with our team to continue addressing some of the city’s most important needs, more specifically those needs related to infrastructure,” said City Manager Mark Rohr.