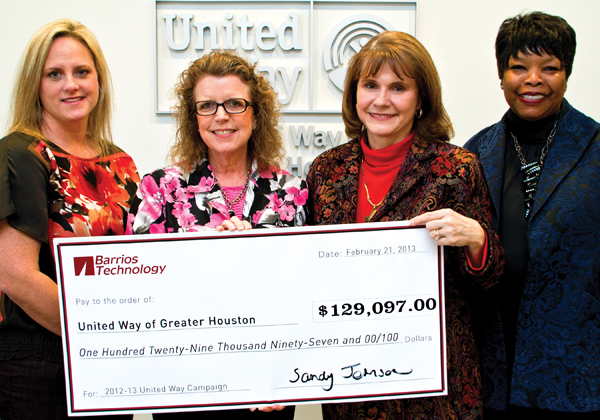 $129,097 pledged at Barrios: For the fourth year Barrios Technology has presented a check to the non-profit organization that exceeded the $100,000 level. At the close of its 2013 workplace campaign, 43 percent of Barrios employees pledged $129,097 to show their commitment to building a stronger tomorrow. Pictured, from left, are this year’s United Way Chairman for Barrios Tracey Escamilla, Barrios President and CEO Sandy Johnson, United Way of Greater Houston President and CEO Anna Babin and Director of Donor Relations of United Way of Greater Houston Yvonne Thornburg

Turkish steel manufacturer Borusan Mannesmann Pipe plans to expand its manufacturing operations to the U.S. with a steel pipe plant in Baytown, creating 250 jobs and $148 million in capital investment.

In making the announcement, Gov. Rick Perry said the state is providing $1.6 million from the Texas Enterprise Fund to close the deal.

Borusan Mannesmann is a leader in steel pipe production for a variety of industries, including oil and gas drilling and transmission. The proposed Baytown plant plans to produce casings used to secure oil wells and tubing to extract gas and oil from the ground, adding 300,000 tons of manufacturing capacity.

“This investment will establish Borusan as a local manufacturer in the U.S. market,” Borusan Chairman A. Ahmet Kocabiyik said in a statement. “This investment is the beginning of a new era, not only for economic relations between the U.S. and Turkey, but also for our steel sectors.”

The City of Nassau Bay has been awarded the Distinguished Budget Presentation Award from the Government Finance Officers Association.

The national award, based on policy document, financial plan, operations guide and several other categories, was presented to the Nassau Bay Finance Department.

“This is the city’s first ever award, and along with our second Transparency Award (presented earlier) shows that our elected officials and staff work very hard to produce a budget and financial records that are transparent and accountable to our taxpayers,” City Manager Chris Reed said.

The Boeing Co. of Houston, a NASA Commercial Crew Program partner, has successfully completed a preliminary design review of the component that would connect the company’s new crew capsule to its rocket.

The review is one of six performance milestones Boeing has completed for NASA’s Commercial Crew Integrated Capability initiative, which is intended to make available commercial human spaceflight
services for government and commercial customers. The company is on track to complete all 19 of its milestones during CCiCap.

The University of Texas Medical Branch has begun work on its $90 million building expansion project at Victory Lakes in League City that will include an emergency department and beds to accommodate patients requiring overnight stays.

The project will create 142,000 square feet of clinical space, allowing for the addition of 39 patient beds and inpatient stays of up to 72 hours in order to better serve its patients. In a related project, UTMB will build a central-plant facility to provide utilities to its 62-acre Victory Lakes campus.

The clinical space project on its 62-acre Victory Lakes campus is scheduled for completion in February 2015 and will provide 39 inpatient beds for up to 72-hour stays, 17 emergency/urgent care treatment rooms, four operating rooms, endoscopy rooms and 25,000 square feet of shell space for future development.