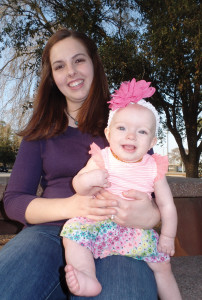 A victim of sex trafficking lays claim to a bright future

Breanna never uses her full name when writing or speaking. With her background, it’s best to stay below the radar.

She was born 24 years ago, the fourth child of a cocaine-addicted teenage prostitute, and juggled between home and Child Protective Services until she was three.

The cycle ended only when a drug dealer broke into her home demanding to be paid. While daughter watched, the man, beat and abused her mother. Instead of killing her, he took Breanna as payment, and quickly sold her into the sex trade.

“I like to think I saved my mom’s life that night,” she says.

For the next three years, Breanna was both slave and victim in a world she did not understand. Her memories are vague, but she knew she was far from home. The days blended together in a long string of violence and pain.

It took the relentless efforts of a persistent grandfather to track Breanna down and, through a long legal process, bring her back.

But though she was home, she was not free from abuse. At six, she stayed with her mother, fresh out of drug rehab. At seven, family members and friends re-victimized her while her mother seemed not to notice. She was older, fearful of her abusers and deeply wounded by her mother’s betrayal.

Not all was darkness and despair, however. In high school, Breanna made her first “best friend,” a schoolmate named Justin.

One day she visited a church, and found Justin there.

There, too, her lost, wandering soul first felt the love and compassion of God.

“God spoke to me that day. I knew He was saying He was going to use me, that I would serve Him the rest of my life. I had such joy!”

Breanna’s new faith led her to make decisions no longer based in fear, but for the highest good of the people in her life.

At 17, an abusive older brother returned to the house. For the safety of a niece, she told her mother and stepfather about him. They called Breanna a liar, threw her down a flight of stairs, and locked her in a closet.

“I prayed, ‘God, you have to do something or I will die.’ The next day, my younger brother snuck in and let me out. We took off running as fast as we could. I went to school looking beat-up and wearing dirty clothes. I was called into the counselor’s office and for the first time, I spilled my guts.”

CPS caseworkers told her mother and stepfather that for Breanna to return to the house, the abusive brother had to go. Instead, her parents chose the brother, and told Breanna she was no longer wanted.

She left for good.

She lived with a friend until she was college ready, then left for San Houston State University in Huntsville. She majored in victim studies and got involved with a campus Christian organization where she found “family” and soaked long and deep in biblical teaching and worship.

During one service, a campus pastor spoke about forgiveness. Breanna knew it was time to let go of her anger and bitterness. It was time to forgive her abusers—and her mother.

“I went through a lot of healing in college,” Breanna says. “What I had been through no longer defined me. I was no longer a victim.”

When she graduated, she found ways to help organizations that minister to victims of sexual abuse. One is Home of Home in Spring, Texas.

“Home of Hope is so important to me,” she explains. “Had I had the kind of help as a child that the home provides, I’m sure I would not have been re-victimized.”

The boy from church who followed her to Sam Houston State University never gave up on his best friend from high school.

“He pursued me for years,” Breanna says with a huge smile on her face. “We got married after I graduated.”

Today, Justin and Breanna have a bright, blue-eyed daughter named Remmy Nichole, the first child of a “new generation,” born into a loving Christian home.

“I see so much promise in my daughter,” Breanna says softly. “I have seen a cycle of hurt that is generational. I realize it’s one of the biggest factors that lead girls into trafficking. The cycle will continue until it’s broken.

“So, I won’t continue it,” she says with firm resolve. “Over my dead body will this cycle continue in my family.”

“God wants to do more than bring partial restoration,” proclaims this mother and advocate. “It doesn’t matter what’s broken in our lives, God can fix it.”