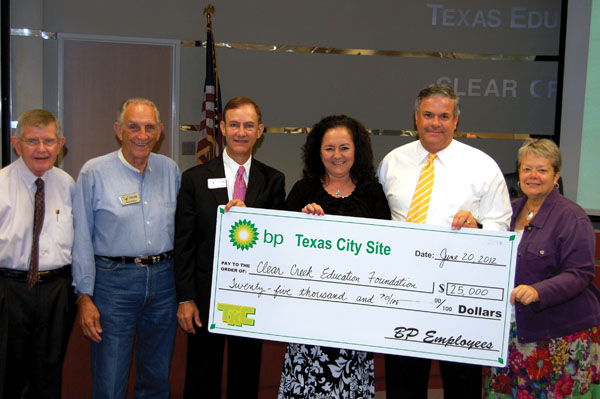 The Clear Creek Education Foundation has had a busy summer in its never-ending quest to carry out Superintendent Greg Smith’s goal of offering Clear Creek ISD students a world class education.

It began the summer by distributing more than $100,000 to fund requests from CCISD teachers for innovative ideas to implement in their classrooms for the coming school year and then kicked off its annual campaign with a $25,000 donation from BP Texas City. “Our annual campaign is all about the Education Foundation forming partnerships with people who want to help improve student achievement in the Clear Creek Independent School District,” Foundation’s Executive Director Doug Frazior said. “More resources are needed to meet the increasing demands of educating our children,” he added.

This is the second year in a row that BP has been the “Lead Gift” donor for the annual campaign. The $25,000 check was the fourth and final payment on a pledge BP made in 2009. “Funds were used to equip Career Exploration Technology Labs in CCISD intermediate schools,” Frazior said. “The labs assist students in discovering careers in math, science, engineering and technology.”

Other programs funded by the annual campaign include grants for teachers who create innovative lessons, tuition and books for students attending Clear Horizons Early College High School and expense reimbursement for teachers who become National Board Certified Teachers.

Foundation board members, CCISD administrators and donors boarded a school bus for two consecutive days of Surprize Patrol and bursting into classrooms to present the grant recipients with news of their grant being funded.

CCEF received more than 130 grant applications and was able to fund 37. The 37 grants will impact more than 15,000 CCISD students in the coming years.

“The year 2012 marks the foundation’s 20th anniversary and this latest round of funded grants puts the total amount of grants funded for CCISD teachers over the $1 million mark,” Frazior said.

Donations from the public to the Education Foundation’s annual campaign can be made online through the websitewww.ClearCreekEducationFoundation.org.