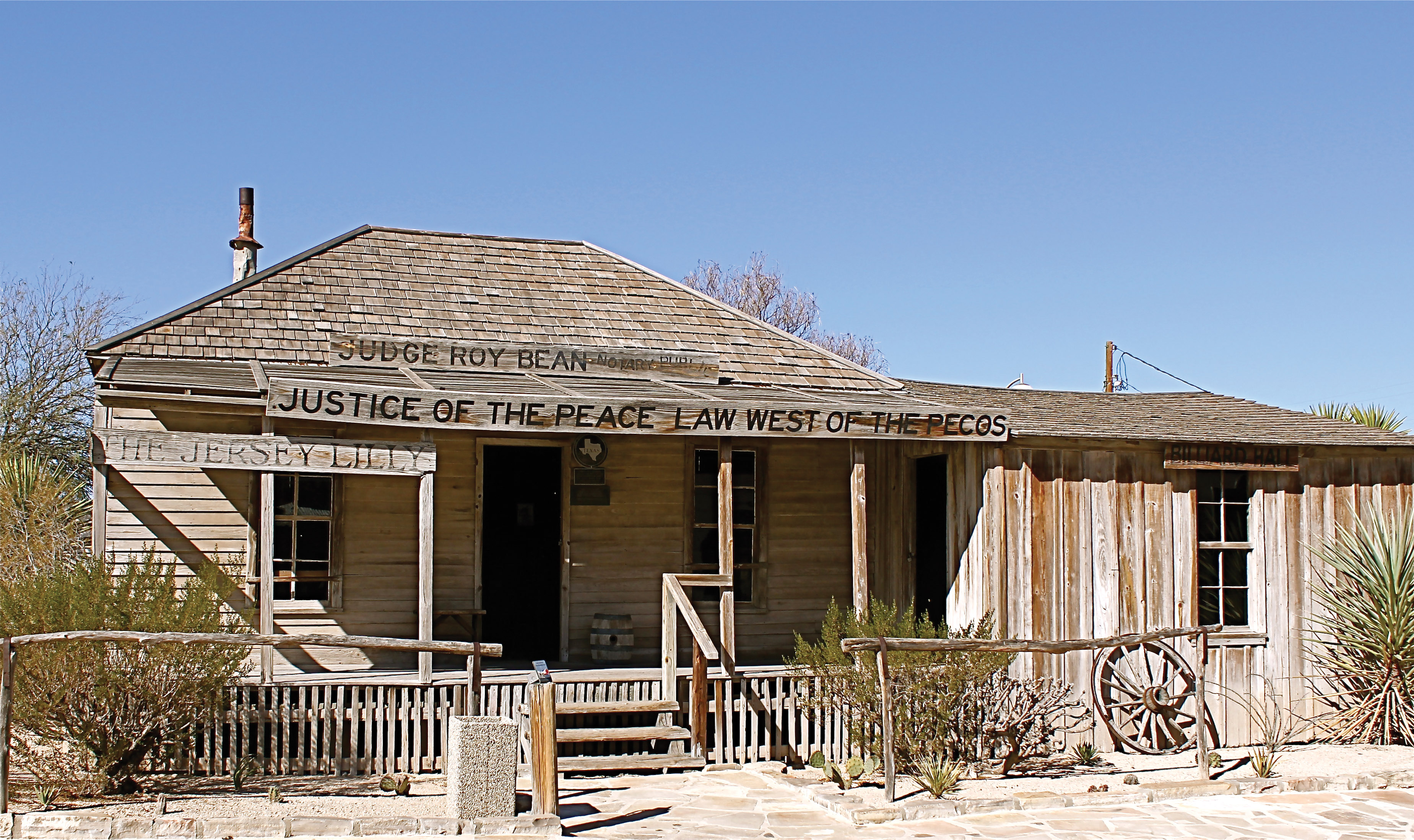 The history of Texas is full of “colorful” characters, many of whom had less-than-commendable lifestyles, particularly early in life.  One of my favorites is Judge Roy Bean.  Known as the “Law West of the Pecos,” a title he created for himself, Bean became the justice of the peace in Pecos County in 1882.

A new railroad was being built along what today is Highway 90.  Since the nearest court was in Fort Stockton, 200 miles away, the Texas Rangers needed somewhere closer to bring local suspects to trial.  Bean happened to own a tent-saloon in Vinegaroon, a spot within 20 miles of 8,000 railroad workers, so the Rangers decided he was their man.

As judge, Bean used only a single law book.  Some say it was a book of Ohio statutes; others claim it was the Revised Statutes of Texas, 1879 edition.  It doesn’t really matter who is correct because it is unlikely the book was consulted often.  Bean made decisions based on his notion of what the law should be, rather than what a book said.

When the railroad moved further west, so did Bean’s saloon/courtroom. Eventually it found its permanent home in Eagle’s Nest.  Here he built an impressive—at least for its time—wooden structure that would be his base of operations for the rest of his life.

Bean had a long time unrequited love for actress Lillie Langtry and named his new saloon the Jersey Lilly in her honor (Okay, so he wasn’t a great speller), and shortly after, changed the name of the town from Eagle’s Nest to Langtry.

Certainly Bean’s style of justice has been the object of much derision over the years.  The bulk of defendants were found guilty on the spot and fined the amount of money they had in their pockets at the moment.  Lesser offenses might draw a sentence of buying a round of drinks for everyone at the bar.  He refused to forward those collected fines to Austin and though some in the state government objected, they soon learned to live with it.

But he was also well known for a very different reason.  He regularly took the profits from both his bar, and from court fines, to buy food and medicine for the area’s poor on both sides of the Rio Grande.

Lesser known, though, is the fact that Bean was a border crosser of another type.  That is, he started out as an habitual criminal.  Prior to taking the position of justice of the peace, he had committed a murder in Chihuahua, escaped a long prison sentence for assault with intent to kill when he made a successful jailbreak in San Diego, killed a Mexican official in northern California in a fight over a girl and was run out of San Antonio for criminal business practices when he was caught selling rustled cattle, watering down milk and selling timber from a neighbor’s land.

Even though as judge his decisions were occasionally suspect, it is undeniable that he made a successful crossing from a life of crime to that of a crime fighter.

Whether we recognize it or not, we are all born with boundaries that come as a result of a variety of things beyond our control: things like who our parents are, where we live, our physical abilities and inabilities, and of course, our social class.  Much of my academic research has been in the area of working class students and their experiences with college and ultimately with moving into the managerial/professional classes.  We know a lot about the kinds of things these students have to deal with in their quest to become border crossers.  As children, they are trained in a set of class codes and etiquette rules that, while encouraging good behavior, make college performance difficult (e.g. never question authority, contentions are valid because of who states them, etc.).  Beyond that, they often lack many of the prior experiences their more fortunate classmates have (books in the home, learning-based vacations and family outings, etc.)  And all these problems are exacerbated by the fact that working class students are completely unaware these differences exist.  In fact, most cannot even hear the differences between their own speech patterns and those of their professors and fellow students.

In spite of all that, some are successful.  They finish college, sometimes even go on to grad school.  They take jobs that are managerial/professional in nature and live a very different life from that of their parents and siblings.  I am living proof of that.  But this success does not come without a cost.  Almost universal among successful border crossers is an estrangement from family and lifelong friends.  Because they now live in a different world, the border crossers cannot discuss their lives with people from the old neighborhood.  They no longer have anything in common.

I will forever remember the day I first brought my elderly father to see the house I had recently purchased and moved into.  As we pulled into the driveway, he looked at it strangely.  I parked the car and got out.  I couldn’t wait for him to walk in and see the magnificent view of the lake he didn’t yet know was there.

He just sat there.  I went around to his side and opened his door.

He looked up at me and asked, “How many people live here?”  At that moment I fully realized how great the distance between us had become.  I had crossed a border; he stayed behind.

One day in 1903, Judge Roy Bean went on a world-class drinking binge in Del Rio.  He returned to Langtry early in the morning and was dead that night.  Some historians, taking a romantic view, claim the cause of death was that he had lost the will to live.  It seemed that with the turn of the century West Texas was moving forward, and that was more than he could handle.  The locals swore that the ground breaking for a new power plant on the Pecos River sent him over the edge.  He is quoted as saying that the world was changing and he was being left behind.  Apparently, the new world provided one too many borders for Judge Roy Bean to cross.

I’m convinced that we all need to move beyond the boundaries that we are born into and that surround us.  More important, we need to overcome the ones we construct ourselves.  That is part of the human drive—to break out of the restrictions we face—to cross borders.  I’m also convinced it is really not all that hard to do.  Millions of people have crossed borders in their lives.  Many have crossed several.

But I am also convinced it is not without a price.  The question is…is it worth it?