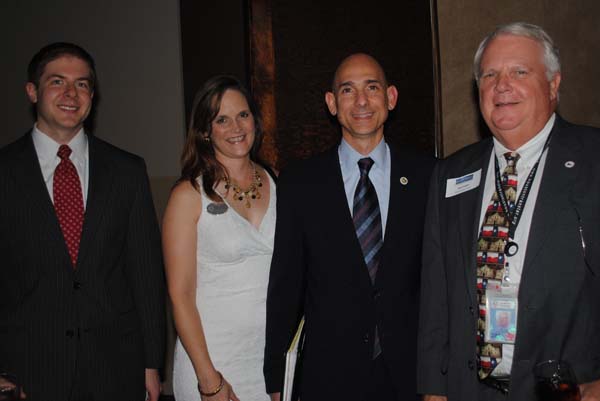 State Rep. Greg Bonnen is both pleased and disappointed with his first term in the Texas Legislature.

Pleased that the state lawmakers came up with a plan to make sure Texas is able to meet all its water needs in 2050 but disappointed they did not solve the state’s insurance problems.

But, all in all, it was a great session for the freshman legislator from Friendswood, who called his stay in Austin “a wonderful place to be and a good fit for me.”

Speaking at Bay Area Houston Transportation Partnership reception held at Cullen’s, he told how he often had some 200 pages of legislation to review each evening – which reminded him of all the work he had in med school – and how his younger brother, who represents nearby Brazoria County in the Legislature helped him understand how things work in the state capital.

“It was a thrill to work with him.”

It wasn’t long before he saw how serious some of the state problems were becoming. “Thousands are moving here – 1,200 per day — putting a strain on our water supplies. Some 80,000 new students are enrolling in our schools each year. We need more money for our schools. We need about $4 billion annually for our roads.”

Many problems and not enough money.

But, at least the lawmakers approved two proposed amendments to the Texas Constitution that would allow for the use of unneeded funds in the state’s Rainy Day Fund to help solve water and transportation problems.

One amendment appropriating $2 billion from the Rainy Day Fund to provide for a water infrastructure plan will be on the ballot Nov. 5.

A second amendment providing about $1.2 billion for road repairs was approved and will be on the ballot in November 2014.

The neurosurgeon, who served on both the House Appropriations Committee and the House Insurance Committee, said he is hopeful voters will realize how important the water management plan is and approve the amendment.

If so, then he said, “I think 50 years from now people will say, ‘I’m glad that 50 years ago those people were paying attention and looked out for us.’”

He was introduced by BayTran President Barbara Koslov, who invited the audience to the next BayTran luncheon at Cullen’s Upscale Grille at 11:30 a.m. Wednesday, Sept. 19.