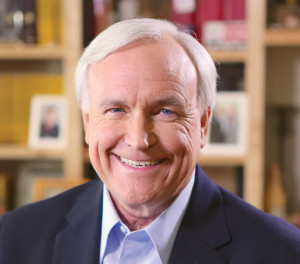 Pledging to get city government “back to basics” and address the chronic budget and infrastructure problems that threaten Houston’s future, former Kemah Mayor Bill King announced his candidacy for mayor of Houston.

King, 63, made the announcement March 2 standing on the median on Kirkwood Road in west Houston, pointing to pot holes to highlight his “Back to Basics” platform that he succinctly describes as: “Fix the streets. Catch the crooks. Balance the budget.”

The announcement came shortly after the businessman and civic leader told a large crowd of Bay Area friends and supporters that morning of his intention to enter the mayoral race at a breakfast at Bay Oaks Country Club in Clear Lake – reminding them that he “knows the way to get to Clear Lake without an aide having to drive him there.”

He also urged the local crowd to “lay aside ideological differences and help me get out the vote in Clear Lake,” noting that if all 40,000 local registered voters turned out, they could swing an election. Yet, at times only 19 percent vote, he said, after being introduced by Sheryl Berg, who was the runner-up in the District 129 legislative race to represent the area.

Former CCISD Trustee and Clear Creek High Principal Ralph Parr also took the microphone to urge a vote for King, who he called one of his best and brightest students.

“On the basic issues affecting our lives, city government too often isn’t getting the job done — so today I am declaring my candidacy for mayor to get Houston back to basics,” King said. “I want to put my business experience to work getting City Hall focused on fixing the streets, catching the crooks and balancing the budget.”

He also asked his fellow Houstonians to come together to put “America’s City of Opportunity” back on the path to financial stability, no doubt alluding to the problems with fire department pensions.

King, the son of a union pipefitter, grew up in the Houston area and was the first person in his family to graduate from college. He worked his way through the University of Houston — where he earned both his bachelor’s degree and his law degree — and over the last 40 years he has led numerous businesses and practiced law in Houston.

From 2001 to 2005, King served two terms as mayor of Kemah — during which time he started spearheading a regional effort to address the lack of hurricane planning. From 2010 to 2014, he wrote a weekly public policy column for the Houston Chronicle, which gave him an opportunity to study a broad range of issues confronting the City of Houston: aging infrastructure, public debt, traffic, economic development and many others.

“The massive problems we face have been years in the making,” King said, “and it will take a united effort to turn our city around. All my life, I have worked hard and reached out to find solutions – and so I am going to ask every Houstonian to lay aside their partisan and ideological differences, and come together, and help me get this city back to basics.”

For more information, go to www.BillKingForHouston.com