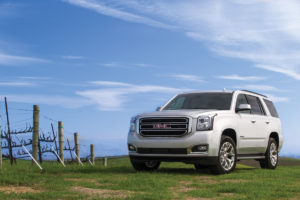 Despite the glut of crossover utility vehicles on the market, the biggest and most capable body-on-frame SUVs continue to thrive. These three-row haulers not only get you there in style, they hold up to the rigors of towing the RV or boat with powerful V-8 engines.

GMC has been building its version of the Chevy Suburban, now called the Yukon XL, Since 1937.The current sleek, new body style made its debut almost 2 ½ years ago and it continues resonate with Suburbanites and Yukoners alike.

The green house’s shorter glass height gives this beast a “chopped” roof appearance, while the upscale chrome grille, with extra-large GMC emblem, lets everyone know you are driving the king of “burbs.” 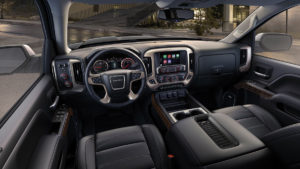 The well appointed interior of the GCM Yukon XL Denali

The interior comes with high zoot leather and semi-firm cushions, richly appointed trim pieces and all the high-end electronics to keep you constantly “connected.”

No longer do you have to wrestle the 3rd row seat out of it nest since it is finally capable of folding down into the floor.

Second row seating is available in a split bench-style configuration or captain’s chairs.

If you ever wondered why you see so many Yukon’s on the road, we encourage you to find out why the Yukon XL is still one of America’s best loved, full-size SUV’s. 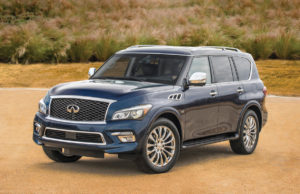 Nissan is known for its distinct, nothing-else-like-it styling and the Infiniti QX80 is the epitome of that ontology.
Its headlights are positioned lower than most other SUVs and are mounted on what appears to be actual front fenders that are below the QX80’s hood line.

Revamped for the 2015 model year, the 2016 carries the badge forward with a Limited package that, as Infiniti touts, is “the most premium SUV ever offered by the brand.”

Like the Yukon XL, the QX80’s interior offers three rows of seating.

Contrasting colors and textures create a cabin that is rich in texture and ambiance. The Limited version goes even further with Truffle Brown Leather appointments, open-pore, matte finish wood trim, and Ultrasuede headliner, just to name a few.

With 400 horsepower, the Infiniti QX80 is capable of towing up to 8,500 lbs., more than enough oomph to pull a family sized RV or ski boat including a cadre of kids.

Base price is $63,250. Expect to pay significantly more for the Limited Edition.