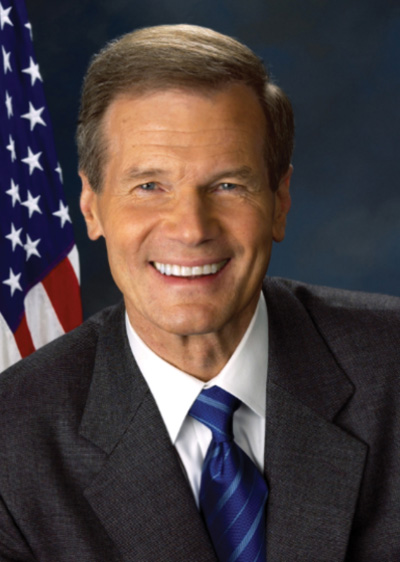 One of only three U.S. congressmen to have flow in space, former Sen. Bill Nelson of Florida has been selected by President Biden to become the next NASA administrator.

Nelson, who spent six days in space aboard Space Shuttle Columbia in 1986, will replace Jim Bridenstine, who resigned after the recent presidential election to make way for the new president’s appointee.

Bridenstine will be a tough act to follow. Although his appointment was widely criticized because of his background as a congressman and lack of qualifications in science and engineering, he won over his former critics. Before long, he was drawing kudos for getting the commercial crew program off the launch pad and his management of the Artemis return to the moon program.

Biden announced on Friday, March 19 that he was nominating Nelson for the top NASA post as the space agency is working furiously to put “the next man and the first woman” on the moon for the first time in more than 50 years and also land astronauts on Mars.

Acting NASA Administrator Steve Jurczyk released the following statement about the Nelson’s nomination to serve as the 14th NASA administrator:

“I’m pleased President Biden has nominated former U.S. Sen. Bill Nelson to lead our agency. Bill has a proven history of supporting our work here at NASA, and has helped advance America’s position in human exploration, science, aeronautics, and technology. While the Senate must confirm the nomination, I look forward to continuing to work with Bill and the Biden-Harris administration to carry out NASA’s many critical missions in the years to come.

“The men and women at NASA are an incredible national asset and will continue to take on the most pressing issues facing our country. As we look to the future – and with Bill at the helm – we will continue to take on and find solutions to problems once thought unsolvable, and educate and inspire the next generation of American scientists, engineers, and workers.”

“I have worked with Senator Nelson and his staff for years. His passion and support for human spaceflight is reflected in his life’s work. His selection as NASA administrator will ensure we stay the course with the current scope of work including the Artemis program.”

“We are excited to hear that Bill Nelson has been nominated as the next NASA administrator. Senator Nelson has a long history of supporting NASA and the programs supported by the Johnson Space Center including the International Space Station, Space Launch System, Orion, and NASA’s commercial Crew & Cargo programs. He has worked across the aisle to get results and can balance the needs of the NASA centers, industry, Congress, and the Biden Administration. We look forward to working with him upon his confirmation.”

Born in Miami on Sept. 29, 1942, Nelson is a fifth generation Floridian whose family came to Florida in 1829. He grew up in Melbourne, Fla., graduating from Melbourne High before attending the University of Florida and then earning a B.A. in Political Science from Yale University in 1965 and a Doctorate of Law (J.D.) from the University of Virginia School of Law in 1968.

After being admitted to the Florida Bar that year, he served in the U.S. Army Reserve for six years, two on active duty, and earned the rank of captain. He started his law practice in Melbourne in 1970 and soon began his political career, first working as a legislative assistant to Gov. Reubin Askew in 1971 and successfully running for the Florida House of Representatives in 1972, the same year he married Grace Cavert, with whom he had two children.

After serving in the state legislature from 1973 to 1979, he was elected as a Democrat to the U.S. House, and served six terms representing Florida’s 9th and 11th congressional districts – including Kennedy Space Center — along Florida’s Space Coast from 1979 to 1991.

It was while in the House, serving as chairman of the House Space Subcommittee, that Nelson began his astronaut training at Johnson Space Center in Houston’s Clear Lake area for his 1986 journey into space – one of three sitting members of Congress to fly on the space shuttle — after Congressman Jake Garn in 1985 and before Sen. John Glenn, a former astronaut, returned to space in 1998. Nelson was recognized as the leading space program advocate in Congress and also was a vocal proponent for STEM career training and education programs. In his 1988 book, Mission, Nelson wrote, “If I was going to speak about the space program accurately in Congress, I wanted to feel what the astronauts felt.” So he began preparing by running four miles a day and working out in the gym. He also had a jet fighter pilot take him up and introduce him to lower space.

Nelson represented Florida for three terms in the U.S. Senate, from 2001 to 2018 — before then-Gov. Rick Scott defeated him in 2018 — serving as the ranking member of the Senate Commerce, Science and Transportation Committee. “Most every piece of space and science law has had his imprint, including passing the landmark NASA bill of 2010,” the White House said in a statement. “That law set NASA on its present dual course of both government and commercial missions.”

On May 28, 2019, he was appointed to serve on NASA’s advisory council, which advises the space agency on all major program and policy issues. His appointment was praised by then NASA Administrator Jim Bridenstine, who said that “Nelson is a true champion for human spaceflight and will add tremendous value as we go to the Moon and on to Mars.”

Nelson, who still must win Senate confirmation, would assume the post at a critical juncture for the space agency, which is working to put humans back on the moon for the first time since 1972 and, later, to land astronauts on Mars. Its back-to-the-moon program comes as other nations, particularly China, have been increasingly building their space programs.

Bridenstine, a former Republican congressman from Oklahoma, was confirmed by the Senate in 2018 amid objections from both Nelson and initially GOP Sen. Marco Rubio of Florida. “The head of NASA ought to be a space professional, not a politician,” Nelson said. Despite that opposition, Bridenstine chose Nelson to join the NASA Advisory Council in 2019.