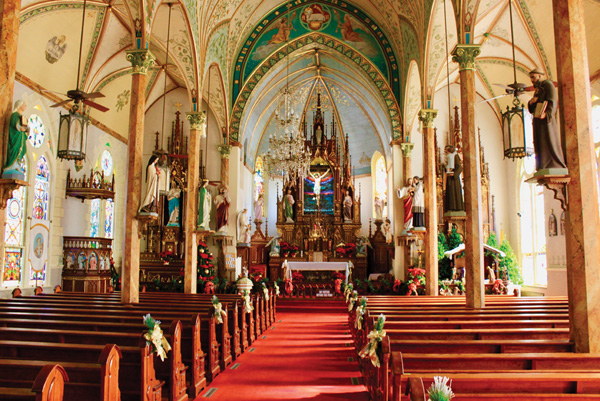 My best friend and his wife were down from Indiana for a bit of an escape from winter and we thought we’d spend a few days roaming the area around Schulenburg and Gonzales.  On this morning, we were headed to Shiner to tour the Spoetzl brewery (well, mostly to get the free beer) and to have lunch at Friday’s Fried Chicken.

On the way to the brewery, I decided to take a very slight detour.  I pulled into the parking lot at Saints Cyril and Methodius Church and turned off the engine.  After fielding questions about possible car trouble, I convinced everyone that all was well and I just wanted to show them something.

I’m sure my passengers were puzzled by this out-of-character action.  I’m not “churchy.”  I am, however, a big fan of great art and architecture.  So every once in a while, I like to stop in at one of Texas’s painted churches.  To be honest, none of them are all that impressive architecturally—from the outside anyway.  Most are so ordinary that they look like thousands of other little churches across America.  Saints Cyril and Methodius is built of simple red brick, has a nice steeple and a bit of brick adornment, but there is nothing about it that might make you look twice as you drive by.  And of course, my guests were underwhelmed.

Reluctantly, they followed me into the front doors of the church and I immediately heard the audible gasps.  They had never seen anything like this, especially in a building this small.  It is like walking into a baroque cathedral from the 16th century, only miniature—and wooden.  Yes the columns and balustrades all appear to be marble, but look closer.  They are all made of wood.  And there is barely an inch of the walls or ceiling that isn’t ornamented extravagantly.  Even the stained glass windows are amazing.  We ended up spending nearly an hour there, taking in the whole, and then all the details, before heading for Spoetzl.

But every once in a while . . . someone or something will grab us by the collar and say, ‘Hey.  Come take a closer look.’

The painted churches are a great place to visit for several reasons.  Certainly they are beautiful, but I think it is important to understand their part in the history of the settlement of this part of Texas.    European immigrants tended to settle in ethnic clusters.  We have communities of German settlers (Fredericksburg), Polish (Bandera), Czech (West) and here in Shiner, Slovaks.  These communities were bound together by their parishes and one of the first projects for any new community was to build a church.  Many of these people worked to construct the church even before they built their own homes.  Coming from places where churches were old, large and spectacularly decorated, they did the best they could with the resources they had available to them.  Some of these buildings, being of wood, were destroyed by fire. Others fell victim to hurricanes and other natural disasters.  Regardless of the cause of destruction, the churches were immediately rebuilt, usually even more spectacular than before. A big part of the history of central Texas and the Hill Country can be seen in these churches.

But I think a better reason to visit them is because these churches have a lot to show us about who we are and how we live our lives.  Think for a moment about the people we pass by every day or the opportunities for experiences that are constantly presented to us.  If we see them at all, most look so commonplace and unremarkable that we don’t even consider them to be worthy of our attention or effort.  Besides, we have other things that are making demands on our time, things that have to be done now!  And so we just let them pass by without giving them a second thought, concentrating instead on where we are going or what we have to do when we get there.

But every once in a while, if we’re lucky, someone or something will grab us by the collar and say, “Hey.  Come take a closer look.”  Oftentimes that “suggestion” is subtle, and we just ignore it.  Many times it takes something considerably more forceful, almost violent, to jar us out of the zombie-like state we are in as we proceed with our daily grind.  Those are magic moments because they force us to be present, right now, in the world—not lost in some future commitment.

When I think about the people and the experiences that have had the greatest meaning for me over the years, many of them were just like this church—appearing to be commonplace, maybe even boring—people and things I didn’t even notice on my first look.  But when something compelled me to take the time to see what was really “inside,” I was overwhelmed.  I can’t help but think about how many thousands, hundreds of thousands, of people, places and moments I missed as I plowed ahead like a fullback on a blast play, unaware of what was around me as I focused on the immediate goal or task.

I suspect you are a lot like me.  We all go through life at a frenetic pace, barely seeing all the truly great things, and people, that are all around us all the time.  We can’t help it.  That is the nature of the society we live in.  But whether we take the time to notice them or not, these things, and people, are there for us—and available for the taking.

If we would only take the time—and make the effort—to be present, now.