“Before This Decade is out…” 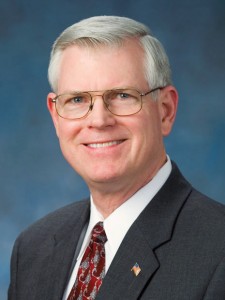 Those words, spoken by President John F. Kennedy on May 25, 1961, to Congress and America forged the future of human space flight and that of Johnson Space Center. It also plunged the small fishing, farming and ranch communities of the Clear Lake area into the Space Age.

By the time I arrived here with my family in 1979, the engineers at JSC had already taken our nation to the Moon and were then focused on readying the space shuttle for its inaugural mission. The area was bustling with new businesses, new homes, new schools and an infectious sense of pride, excitement and oneness with the space program. NASA has been instrumental to the growth and diversification of the regional economy.

While NASA attracted many of the best and the brightest to build the team that would reach for the moon, build a space station and push the technology world to incredible heights, Clear Lake nurtured that cooperative spirit. This community has never wavered in its support of the JSC family and I believe JSC has been a good steward for Clear Lake.

It took great leadership to bring the many smaller communities of the area together to form the Clear Lake Area Chamber of Commerce 50 years ago.  That decision was significantly influenced by NASA’s decision to locate the Manned Space Flight Center here in 1961. Today, we celebrate 50 years of a shared commitment to leadership, educational excellence, community partnerships and quality of life.

Since the Chamber’s establishment, Johnson Space Center has been a partner, and Ex Officio Member on the Board of Directors, as its leaders shaped the policies and programs that have built this community. As JSC grew, so did the Chamber, reflecting the economic growth and impact of America’s space program.

If “location, location, location” is true, then our nation chose well when it selected the Houston region. Whether in times of triumph, such as that of our final and successful STS-135 Space Shuttle mission; or in tragedy, sustaining our team following the losses of Apollo 1, Challenger and Columbia, the Clear Lake Area Chamber has stood beside our Center.

I am especially proud of the partnership we have that expands our efforts in Science, Technology, Engineering and Mathematics (STEM) education. Through the Chamber’s annual New Teachers’ Luncheon, JSC has welcomed thousands of bright and enthusiastic teachers as they launched their career with the Clear Creek Independent School District.

For nearly 20 years, we have collaborated on the annual Ballunar Festival/JSC Open House, welcoming the public with open doors to our facilities, educating and entertaining countless.

Our official visitor’s center, Space Center Houston, remains vibrant because of the  long-standing relationship with the Chamber and the Clear Lake community  The Chamber, joined with other community partners such as the Bay Area Houston Economic Partnership, have taken the message of the importance of America’s investment in human space exploration and how the world benefits in health, science, technology and more from that investment to elected officials in the state and in  Washington, D.C.

On behalf of the team at Johnson Space Center, I want to take this opportunity to thank the Chamber for its collaborative spirit and say that together we will chart the path to the future – both in space and in our community – that brings the benefits of human space exploration home.  NASA is ushering in an extraordinary chapter in our nation’s story of exploration. As we focus on deep space exploration, our commercial partners are building systems to take cargo and crew to the International Space Station. Additionally, exciting science that will benefit humanity is taking place on the Space Station, engineers at JSC are focusing on the next generation of technologies, and the Orion multi-purpose crew vehicle team, managed from JSC, is getting closer to its first uncrewed flight.

We are busier than ever at the Johnson Space Center. As we move ahead, we will continue to foster partnerships and create synergies with local industry, businesses and academia. I look forward to the next 50 years.