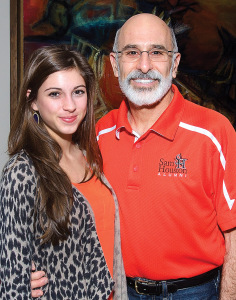 Danielle Ferris is following in the footsteps of her dad, Jim Ferris of Baytown. Both have served as cheerleaders at Sam Houston State University.

The apple, the old adage goes, does not fall far from the tree. So, it is no surprise that Danielle Ferris of Baytown would follow in the footsteps of her dad, Jim Ferris, and attend Sam Houston State University.

Or that she is a second-generation Bearkat cheerleader, again following in the footsteps of her dad, who cheered at Sam Houston State from 1965-67.

There are 40 years between their experiences as a cheerleader, but, for both, cheering for the Bearkats was how they broke into college.

“I can’t imagine what my life would have been like if I wasn’t a cheerleader here at SHSU; it just started everything,” Jim Ferris said. “It gave me a purpose and a reason not to go home. I just lived the life here for four years, made friends and took every chance I was given.

“I never dreamed 40-something years later my daughter would do the same thing,” he said. “I was really proud of her when she told me she was going to try out. She wasn’t a cheerleader before, so I thought this is going to be a tough road — definitely seeing what cheer is like now –but she worked really hard.”

Watched brother
Jim Ferris grew up in Austin, where he watched his older brother cheer during his high school years; it was then that Ferris decided he wanted to cheer in high school as well.

“Austin High had four girl cheerleaders and four guys; it was traditional. Everybody was supportive, and it was a big deal there,” he said. “I did it, and so when I came to SHSU I thought I might as well try out.”

For Danielle, tumbling came before cheer. Although she did gymnastics when she was younger, her senior year of high school she decided to attend tumbling classes at a nearby gym.

“I started tumbling for fun, but as I started progressing, my dad brought up the idea of trying out for cheerleading,” Danielle said. “I thought it would be fun to at least try, so we started training.”

Getting ready for tryouts and the tryouts themselves were different for Danielle than they were for her father. Because cheer is mostly comprised of gymnastics and stunts these days, she had to learn quickly and work hard. “I was in the gym tumbling almost every day to try and learn things people had been doing most of their life,” Danielle said. “As I got closer to tryouts and I started stunting and tumbling more, I was really nervous. The day before I came to Huntsville for tryouts, my coach hugged me and told me to just go out and do my best.”

“It was a grueling three days when she tried out, but I was really proud of her and excited when she made it,” Ferris said.

Changed her life
“I remember after seeing my number on the sheet of paper. I was so excited I think I was shaking! It has definitely changed my life, and I am so glad that I tried out,” Danielle said.

When Mr. Ferris was a cheerleader “the flyer,” what Danielle does, was non-existent.

“We did stunts and things called ‘wrap around’ that I thought were OK, but no one was flying in the air,” he said. “A guy my size couldn’t be a cheerleader nowadays, because you have to be pretty muscular and stout to be able to hold up somebody above your head. We would hold the girls up, but on their back.”

“Being a flyer is a dangerous job,” Danielle said. “I have been dropped five times and four of those times on my head, but I still really like stunting and being the person that gets tossed around.”

“At first, when I saw her up there, it was really scary, but I understand that is part of the game,” Ferris said. “I think it might be easier for me because I have been through cheerleading before.”

Class president
He graduated from SHSU in 1969 with an education degree. He also lived in the Sigma Chi fraternity house all four years. There were many other activities and groups that Ferris was involved in outside of cheer and school. He was so involved that during his last two years of college, he was unable to cheer due to having too many “points,” so he was asked to let go of something. He chose to give up cheer, which allowed him to become the 1968 college favorite and the 1969 senior class president.

“I was having a great time; I don’t even think Sam Houston had a better time than I did,” Ferris said.

“I really enjoy it here. I have made great friends and have a lot of fun,” Danielle said. “My friends and I just hang out or go shopping in The Woodlands.”

Making the time count where they are, Ferris and Danielle have taken many opportunities to get involved. It is not only their work ethics that have moved them forward, but also the support they have behind them that propels them forward, they said.

Children supported
“My mom and dad were at every game in high school; in college, they only were able to make a few games, but they would always ask how it went,” Ferris said. “They were both proud of my accomplishments at Sam Houston and that meant so much to me. My parents were the fuel to my fire. My wife and I try to do the same for our children.”

That support continues to his own children.

“My parents have always supported me in whatever crazy thing I wanted to try,” Danielle said. “My dad loved coming to the gym and record me as I progressed.

“He still gets in my face at games with his iPad because he doesn’t want to miss a thing. But at points, when I got stuck on a skill or frustrated with myself, they would always make me see things more positively and get me back on track.”

“I would say cheerleading was as competitive as it is today with one exception—today the emphasis is on gymnastics,” Ferris said. “The bar has been raised, but we have always shared a common goal, then and now, that is to be good ambassadors of the school and to exhibit moral character.”

« Help is on the way, ever so slowly
Roberts Wealth Management »
Bay Area Houston Magazine