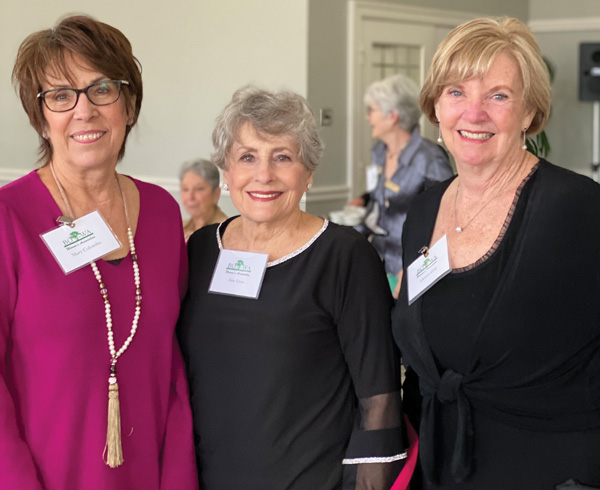 Mary Colombo, Ann Lyon and Glenna Crist, from left, were among the early arrivals for the Bay Oaks Women’s Association’s first luncheon in many months, due to the pandemic that changed our way of life here in the Bay Area.

ENOUGH’S ENOUGH! That’s the way members of the Bay Oaks Women’s Association no doubt felt as nearly a whole year passed without being able to get together for their monthly luncheons, annual gala, board meetings or hardly anything. And, rather than meet to plan the luncheon, they put it all together via their computers before actually gathering at the country club to renew friendships, using the theme, “Leave a little sparkle wherever you go!” 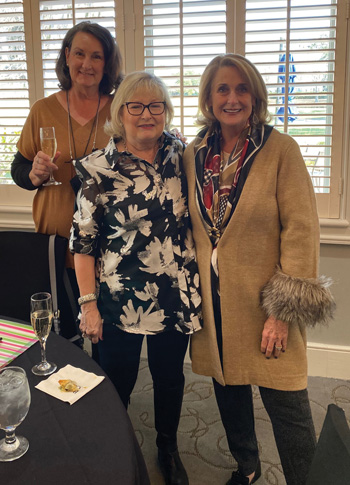 They had hardly had time to say hello when in walked their Past President Susan McCoy, along with Lana Leslie, Barbara Miller, Debbie Givens and Chris Howland– all excited to see one another again.

Before long, they were joined by Sue Ellen Jennings, Melody Billings, Laura Schreiber, Beverly Braden and Bobbie Moutz as they lined up to register with Mary Colombo, followed by Ann Lyon, Debbie May, Debbie Benton and Bridget Pearce, plus new members Diana Pombier and Stephanie Mitzner.

Earlier in the week, members of the incoming and outgoing BOWA boards gathered at the country club to thank outgoing President Sue Laabs for all her work and present her with a beautiful plant. Among those attending, you might have spotted Past President Susan McCoy, Allyson Jackson, Terri Steinkamp, Allyson Jackson, Sue Broughton, Sue Franklin, Cheri Burke and Courtney Atchley.

Each swapped stories and wondered what might have been, but for the pandemic. 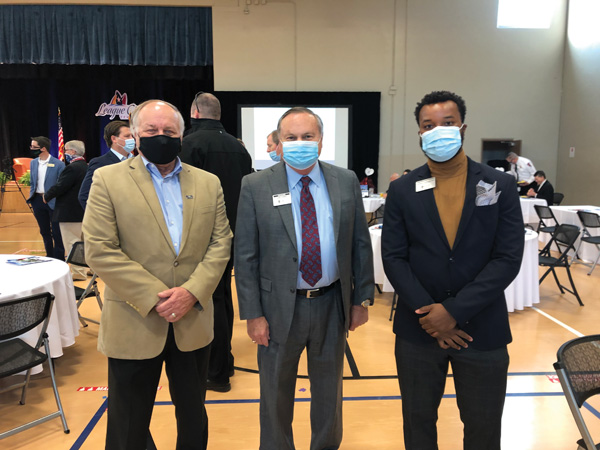 A sold-out crowd of local leaders, citizens and business men and women learned about League City’s successes and challenges in 2020 as Mayor Pat Hallisey and City Manager John Baumgartner addressed the 2021 annual State of the City breakfast. Ashley Quinonez, director of government relations for the Memorial Hermann Health System, served as emcee.

Held at the Hometown Heroes Recreation Center, located at 1001. E. League City Parkway, and sponsored by Ardurra and Memorial Hermann Health System, all enjoyed breakfast served by the Toasted Yolk Cafe, which opened in League City this past December. 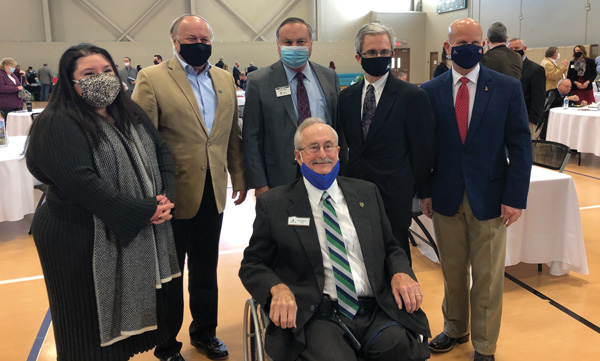 Masks and social distancing were required and attendance was somewhat limited. Attendees also had the opportunity to join the conversation with Hallisey and Baumgartner regarding the city’s achievements, goals, and projects over the past year and moving forward in 2021. 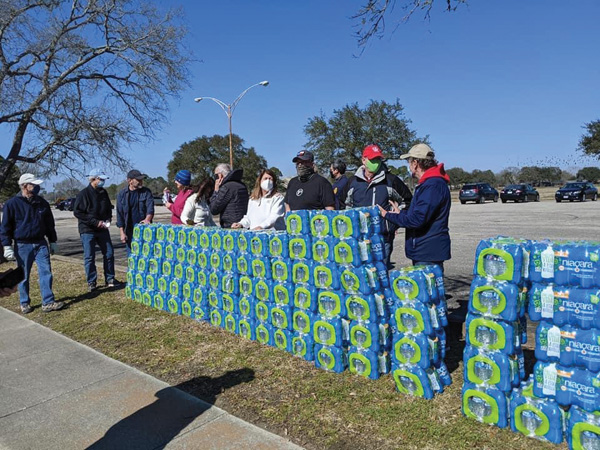 Space Center Rotary members and other volunteers pass out cases of bottled water, provided by the City of Houston, Silver Eagle and the Astros, in the Exploration Green Parking lot on Diana Lane to those in need Saturday, Feb. 20 as the Houston area attempted to recuperate from the devastating mid-February freeze and loss of both electricity and water all over Texas.

DID THAT really happen? One day we’re leading a normal life, the next day we have no electricity, it’s freezing and then we can’t drink the water! The whole country was stunned. Here was Houston, the energy capital of the world frozen over and almost totally incapacitated after a deluge of ice, sleet and snow. Then back to temps in the high 60s and 70s. And, yes, it really happened – a five-day nightmare Texans won’t soon forget.

Finally, the storm moved east and while temperatures returned to normal, much of life didn’t. Many had plumbing disasters – broken pipes and ceilings fallen in, destroying their homes and disrupting their lives. Some people froze to death; others died in traffic accidents as they tried to make it to their homes. Some food was hard to find as grocery shelves stood empty.

Many tried to lend a helping hand, including Space Center Rotary members who turned out to help when the Clear Lake City Water Authority received a call from the City of Houston requesting a place and some volunteers to help distribute cases of bottle water donated by Silver Eagle and the Houston Astros..

The Clear Lake City Water Authority received a call from the City of Houston requesting a place and some volunteers to help distribute cases of bottle water.  The CLCWA gave the Rotarians permission to set it up in the Exploration Green Parking Lot, like curbside service where volunteers put the cases in car trunks as cars drive by. Wasn’t long after the pallets of water arrived that they were distributed by Space Center Rotarians Scott Rainey, John Branch, Melinda Mintz, Kippy Caraway, Jean Walker, Vissett Sun, Raymond Moore, Jim and Carol Saxe, Patty Cooper and Geoff Atwater and several Exploration Green volunteers — gone and in homes where they needed.