Kate Boone was recognized with a Silver BEAR award for her exception sustained performance supporting Orion’s Flight Test Management Office (FTMO). Boone serves as the Program, Planning and Control (PP&C) lead responsible for all aspects of configuration management, risk management, and support to the annual PPBE budget process. Her contributions led to the successful completion of the Orion abort test program that consisted of a successful Pad Abort 1 (PA-1) Test and the most recent execution of the Ascent Abort 2 (AA-2) test flight that verified the Launch Abort System (LAS) capability to steer the crew module and astronauts to safety in the event of an issue with the SLS rocket during ascent. Boone has consistently demonstrated her ability to develop efficiencies in processes that significantly reduce processing time and greatly improved the process effectiveness.
Because of her in-depth knowledge and exceptional grasp on how the Orion Program managed resources, risks, schedules, and documents, these two Orion Program milestones were met on-time and within budget.

Jayne Medellin was recognized with a Silver BEAR award for her outstanding dedication and exceptional logistical support with the Building 4S renovation activities. Medellin led the charge during the 4S renovation, handling logistics, addressing concerns, and making sure that the entire team was able to adjust when they were displaced and then acclimated to their new work areas. Without her diligence and tendency to go above and beyond, Barrios employees would not be able to efficiently serve our customers. Medellin kept all 402 MAPI employees aware of each step so that they could coordinate their schedules and meetings with customers around the move. During the move, in addition to Jayne’s detailed schedule, she went through each floor and left printouts of each cubes new assigned number so MAPI employees understood their seat change. She consistently kept everyone abreast of each step of the move. Medellin took the time to personally go to each employee who expressed concern to show them how to use their furniture while explaining how each function benefited them. Cited in her nomination by NASA customer Gary Johnson, “She has done a fantastic job of getting us thru both the 3A and 3B phases. She was the first to have to relocate personnel into B20 and within 4S. Then on moving back in, she completely rearranged the Barrios workforce, which brought its own challenges. Jayne is fun to work with, she brings great ideas to the table and she works harder than most people. It is difficult to show how much I appreciate the work she has done, but I could not have gotten thru this without her”.

Michael Mein was recognized with a Silver BEAR award for his contributions to developing a strategy to mitigate an ascent oversubscription on the SpaceX18 vehicle and accommodate more hardware on HTV-8. Mein’s leadership and expertise enabled timely HTV8 bilateral trade recommendations for NASA and JAXA cargo and minimized uncertainty within the ISS hardware community as trades were being developed and finalized. Without his contributions, NASA would have been sorely challenged to effectively build and partner those trades with the multilateral hardware community. He coordinated extensively with the hardware community to determine compatibility of the hardware with the available bag sizes, including updates to the bag accommodations as the point solution from JAXA evolved. He also validated and clarified launch requirements/rationale with the hardware community in a compressed timeframe. Mein’s contributions to developing a strategy to accommodate more hardware on HTV-8, both utilizing the vehicle more fully and accommodating larger hardware items than typical, was essential. Mein paves the way for new processes and is always looking for ways to improve the work of the team. He has been instrumental in restructuring the Visiting Vehicle Engineer (VVE) team to better train new members of the team and prepare them to be flight leads.

Arun Saini was recognized with a Silver BEAR award for his expertise in providing NASA accurate metrics and support related to bringing the ISS verification campaign to successful completion for the inaugural orbital flight test of Boeing’s CST-100 Starliner spacecraft. Starliner is a crew capsule designed to accommodate seven passengers or a mix of crew and cargo, for Commercial Crew Program (CCP) missions to low-Earth orbit. For Starliner’s test and verification efforts, Saini worked diligently to ensure accurate metrics were developed, tracked, and provided in a timely manner to support efficient Verification Closure Notices (VCNs) for a challenging first flight of a new vehicle. Additionally, he provided expertise for the joint testing to ensure ISS requirements were met. Cited in his nomination NASA’s Transportation Integration Office commented, “Arun has contributed significantly to the development of ISS integration products required for a first flight, in addition to executing his normal responsibilities. The development of these new products requires in-depth knowledge of ISS design and ground test requirements. Despite several schedule and technical revisions since he first began working this project, Arun has remained dedicated to seeing his responsibilities through in a professional and patient manner.”

Debbie Sharp was recognized with a Silver BEAR award for her is nominated for outstanding, successful efforts to plan, lead, organize, and develop the public and education outreach, employee engagement and communications/media efforts for Orion’s Ascent Abort-2 flight test. Sharp worked the AA-2 Communications Plan for a full year, coordinating and involving participants from NASA Centers, Agencies, companies and organizations. She helped bridge Agency directorates, centers, companies and time zones to deliver an integrated plan for the Agency and the Orion Program industry partners. Sharp orchestrated an Instagram story on NASA.gov that reached 2.6 million and a YouTube video of liftoff which had 200,000 views in one day. NASA.gov Facebook live coverage reached 699,000, 19,000 engagements and there were 24,000 concurrent viewers across all streaming platforms during flight. For media there was 210 media hits in the week surrounding the test and coverage peaked on July 2nd with 71 media outlets covering the liftoff video. Sharp’s post launch news release had 22,000 views, and Orion content on NASA picked up 89,000 views as people browsed from the release. Her dedication to see the plan through and help the team and employees was inspiring. The outcome of the shared experience was a huge morale boost for the NASA team.

Devin Vyain was recognized with a Silver BEAR award for his expertise and support on The Gateway CAMMP Team. Devin is an invaluable member of the Vehicle Configuration team, having supported ISS, and now with growing work and responsibilities on Gateway, Vyain has proven himself as an instrumental asset to the CAMMP team. He consistently delivered high-quality work as a MAGIK analyst and has learned the ropes of Gateway CAMMP work swiftly. Vyain exhibited great understanding of the modeling and mass property techniques of the team early on and has been instrumental in several key deliveries to the Gateway Program, including the IAC4 configurations and mass properties, program coordinate system document, docking clearance analysis, and many more actions. Drawing from his experience with InkScape on the MAGIK team, Vyain was instrumental in drafting the Gateway Program’s coordinate system document. He took the initiative to reach out to stakeholders who would influence coordinate system definitions, and then using lessons learned from CAMMP’s ISS coordinate system document, drafted high-quality definitions and figures, even taking it upon himself to learn orbital dynamics terminology to better-understand the document he was writing. His professionalism is very evident to those that he works with, always prompt with responses and very clear in his communication.

The Barrios Employee Awards and Recognition or BEAR Award recognizes quality performance and outstanding support of customer and company goals. Up to one percent of
the current number of employees can receive the Silver Award each quarter. Silver award winners automatically qualify for the annual Gold award which is presented at an annual awards and recognition reception. 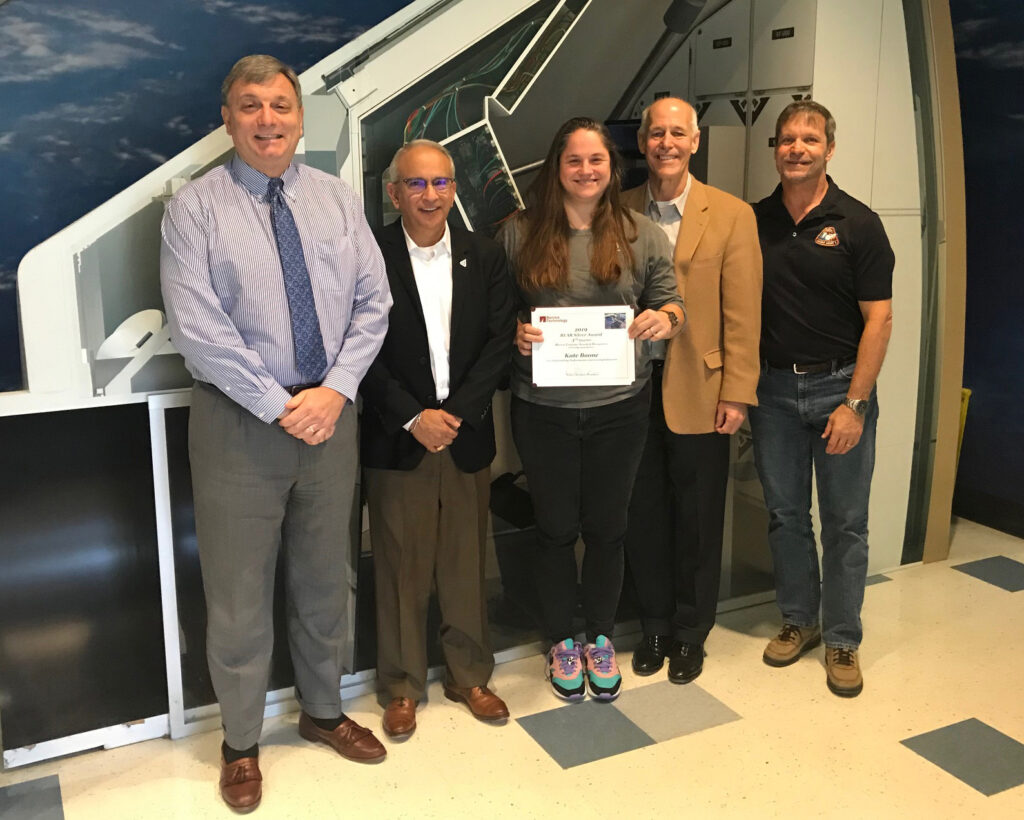 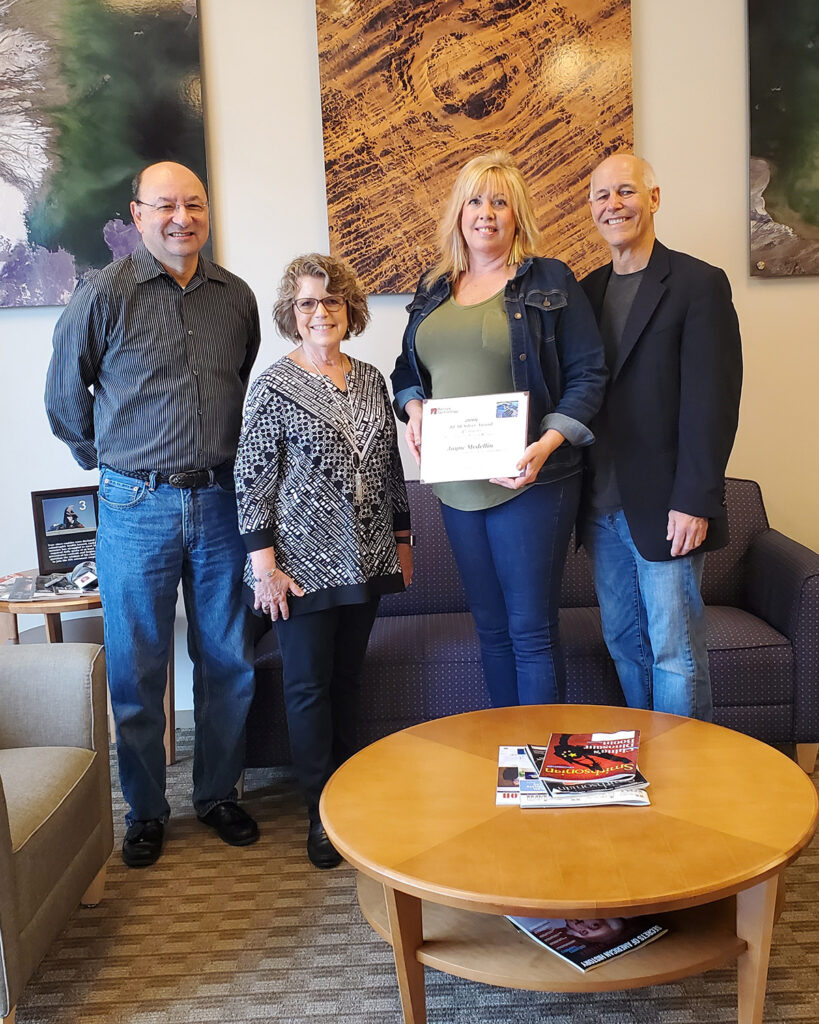 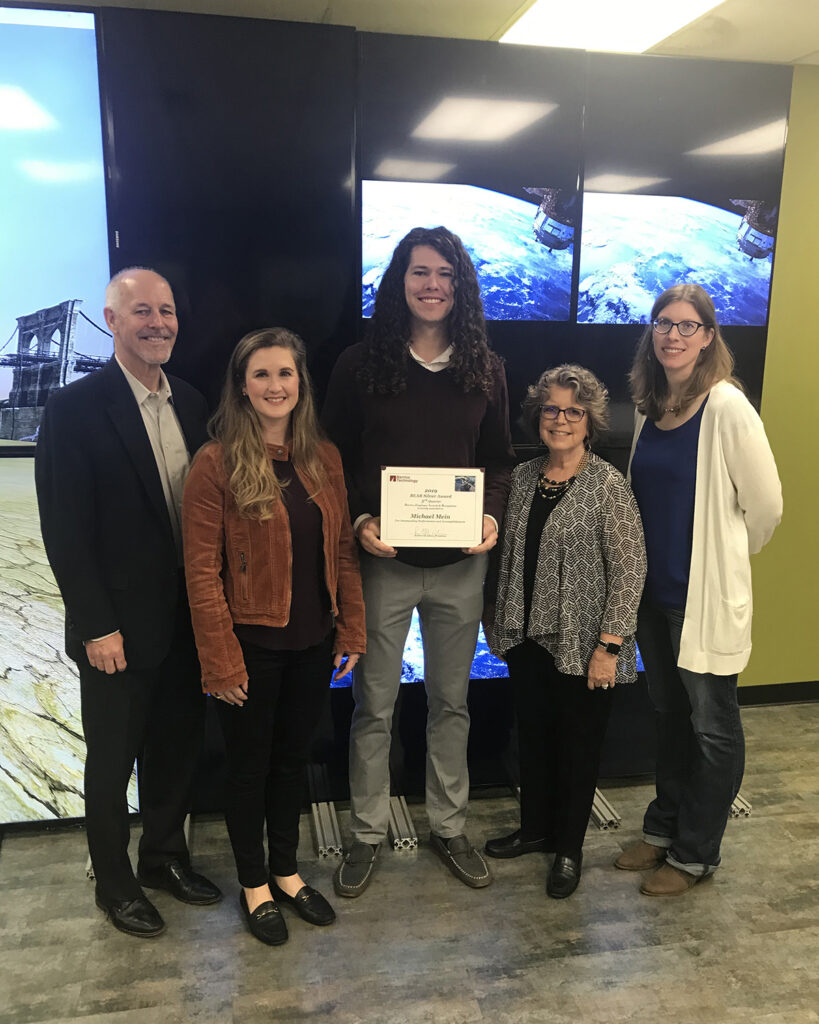 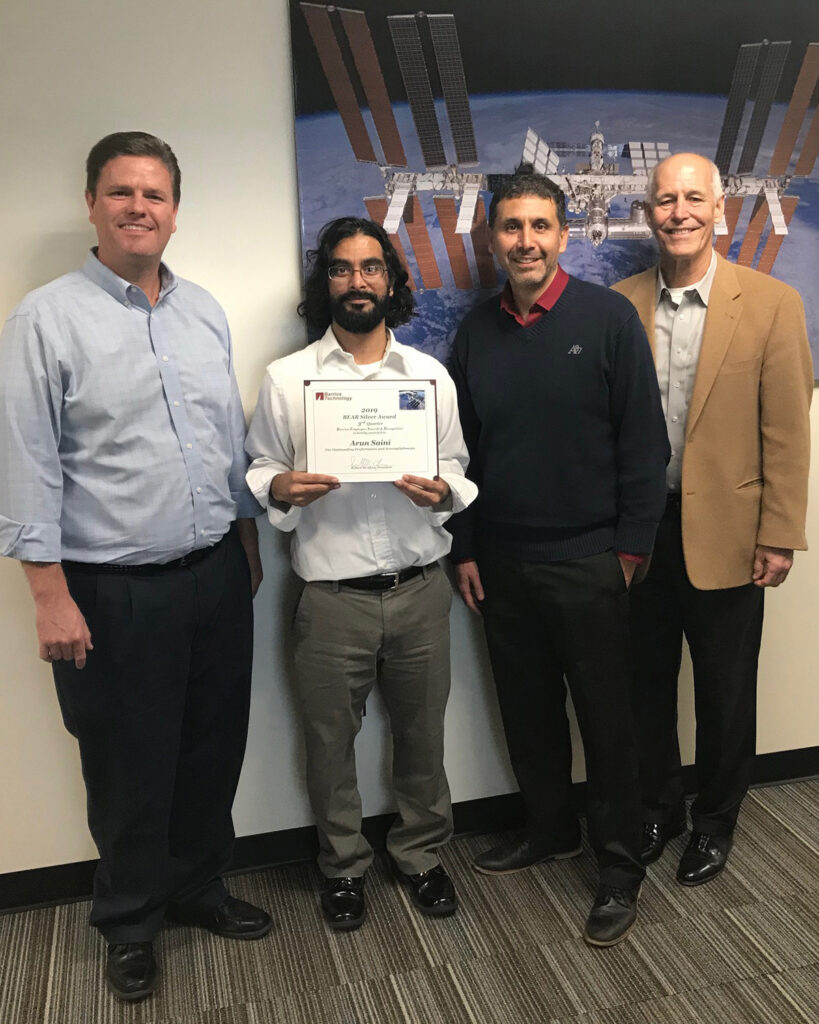 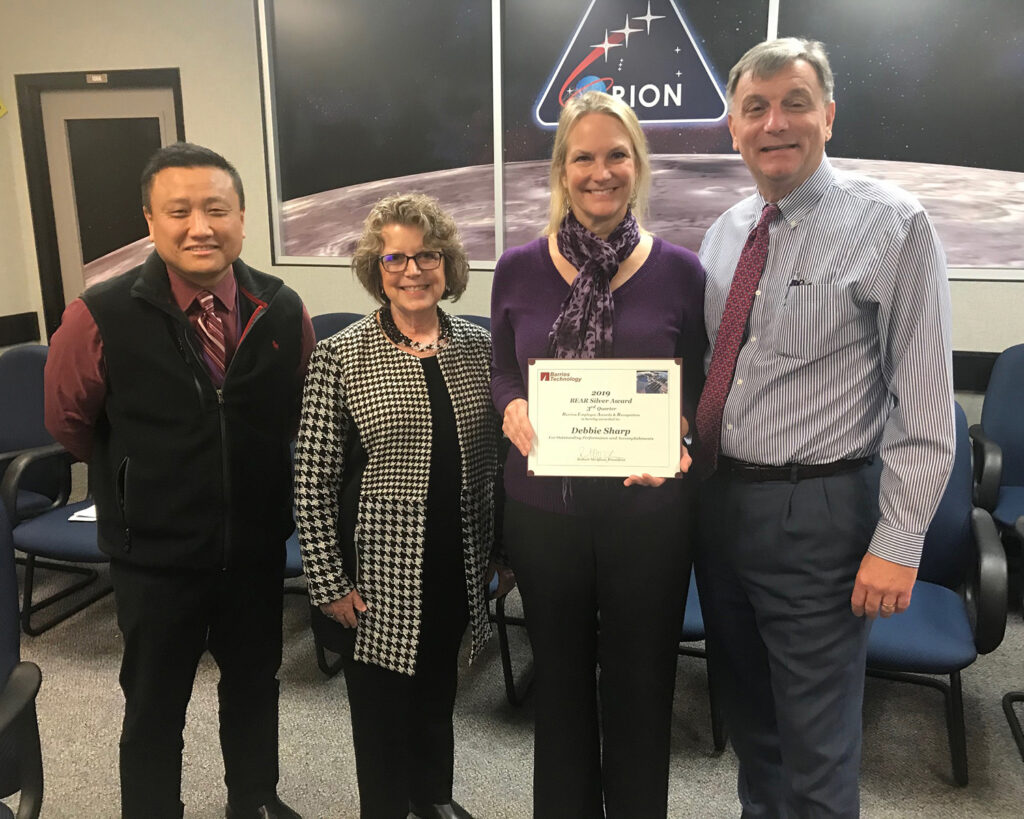 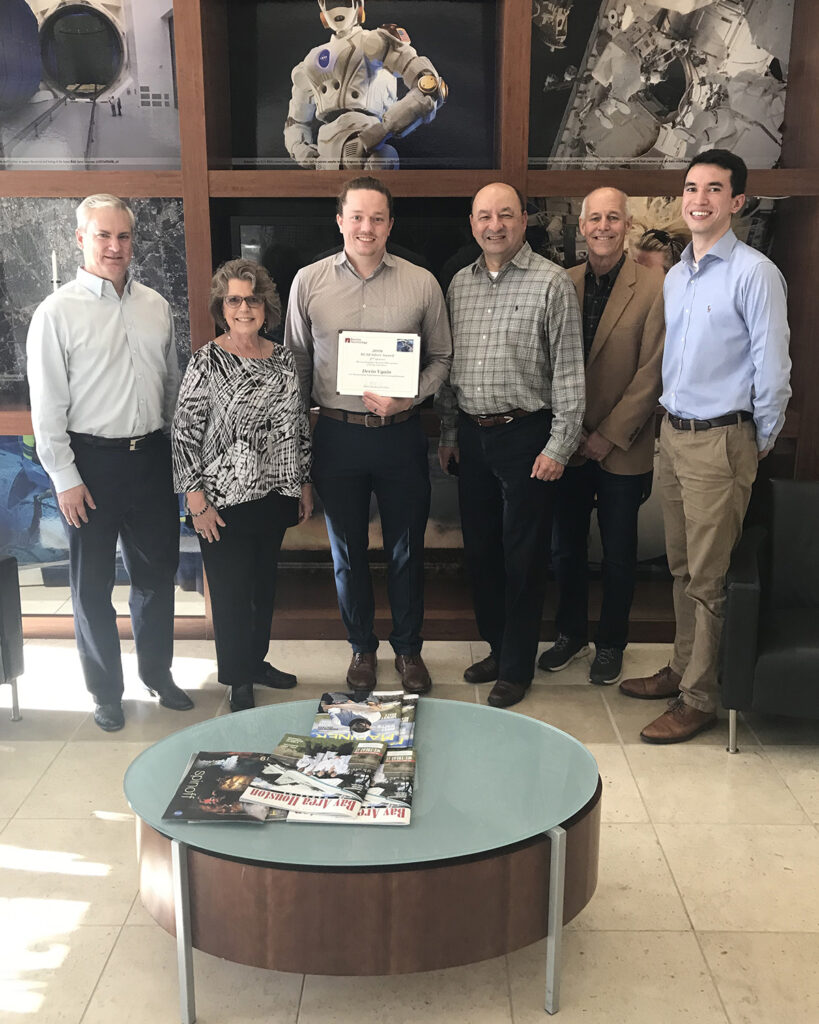