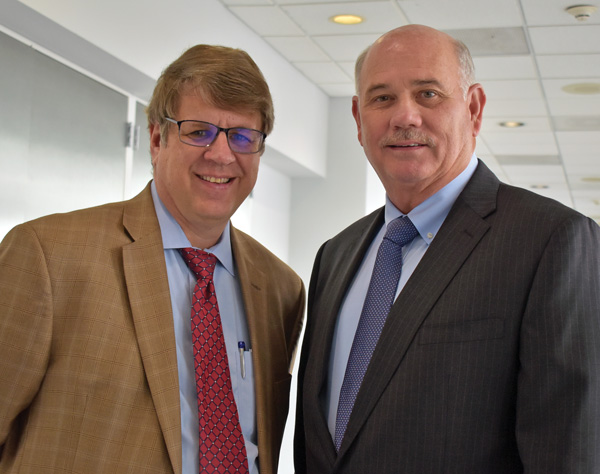 “This has been a monumental health crisis and collapse of the economy. It has really upended the way we think about a lot of things,” said Greater Houston Partnership Senior Vice President-Research Patrick Jankowski as he opened his virtual presentation on the Houston Economic Outlook to members of the Bay Area Houston Economic Partnership on Feb. 25, 2021.

As of Feb. 23, 2021, Jankowski noted that there have been 525,483 reported cases of coronavirus in the nine-county area of Metro Houston with 6,780 deaths. That translates to one in every 13 residents has come down with coronavirus, and one in every 1,042 residents has died. He spoke of herd immunity, which is the point when enough people are immune to the virus that it can no longer spread through the population. He said that once we reach that point we can expect to see the economy really open up. Jankowski related that herd immunity depends on …

Jankowski felt confident that the U.S. would reach herd immunity by late summer, but he was concerned about what might happen outside of the U.S. He said that globally we may not reach herd immunity until sometime next year or even the year following. “This will have a weight on the economy, especially since so much of Houston’s economy is tied to global trade,” he stated.

“At the point,” he continued, “we reach herd immunity, there will be a lot of pent-up demand released, and growth will really take off. Until then there will be lukewarm growth but not the kind of growth that we really need.” He said that due to the pandemic, 22.1 million jobs have been lost. As of January 2021, only 55.6 percent or 12,321,000 have been recouped. However, there are U.S. employment forecasts that predict very strong job growth this year.

Jankowski doesn’t entirely agree with the predictions which are based on past recessions. He believes that there have been structural changes in the economy and that a lot of the jobs won’t come back, or they will come back in a different form citing retail jobs as a classic example. With people’s ability to purchase things online and have them delivered, he feels that many retail jobs are never coming back.

He added, “What we don’t understand is how many of our behaviors, changed to adapt to the pandemic, will be permanent. It will take two years, if not more, from that start of the pandemic to recover all of the jobs that have been lost. The GDP will recover before that, but the jobs will take longer.” Unemployment claims have dropped substantially, but they are still two to three times higher than they should be.

There are major economic drivers that will help support job growth. These include:

Jankowski reported that in Houston, 350,200 jobs were lost in March and April 2020. This was the equivalent to approximately five years’ worth of job growth. Restaurants, bars, construction, energy, wholesale trade, and manufacturing are struggling.

Houston vehicle sales are down. Home sales have hit a record partly due to low interest rates. The U.S. rig count remains even lower than it was at the worst part of the fracking bust. This will continue to affect oil field services, oil field equipment manufacturing, wholesale trade which supplies the oil and gas industry, and exploration and production.

Oil prices are up, but Saudi Arabia has announced that it is going to put some oil back on the market to take advantage of that. “Saudi Arabia, OPEC, and OPEC Plus will probably benefit from the higher oil prices more than we will,” he said.

Jankowski also noted that Houston is definitely overbuilt in office, industrial, and multi-family, and Houston metro construction projects are down a bit. The good news, Jankowski added, is that business and professional services, finance and insurance are the type of businesses that can be done remotely. These include high-paying jobs that are doing well and are good for the economy on many fronts.

Jankowski then changed topics to the impact of the recent record cold weather. He emphasized that the economic impact to Houston could in no way be compared to that of Hurricane Harvey in 2017 as some people have suggested.

As of Feb. 25, the date of the presentation, it was too soon to assess the actual damage caused by the weather. He did say that the hardest hit were those who could least afford it – the hourly workers – 59 percent of all U.S. workers.

In Houston, there are 1.8 million hourly workers, approximately 700,000 households, many of whom did not collect a paycheck because their workplace was closed or they could not get to work.

Refineries, chemical plants, and food processors were affected, as well, from loss of electricity, natural gas, and water. Refineries only operated at 62.8 percent of capacity. During the worst of the pandemic thus far, refineries got down to 66 percent of capacity, Jankowski reported. He also said that inbound truck traffic to Texas was down by almost 47 percent on Feb. 17th, and outbound traffic was down by almost 47 percent the following day.

Texas, Jankowski added, has long been known for its exceptionalism with its wonderful business climate and low regulation resulting in a strong economy. Nationally, Texas is now being challenged. He declared, “We have image repair that we need to do, and we have to figure out what we need to do to fix the infrastructure. It’s going to take a long time, but we have to get it fixed.”