As he began his presentation, Barker spoke passionately about the mission of the Texas Air National Guard, the quality and dedication of its personnel, and its ongoing recruitment of talented people to fill openings in its many specialties. At the start of his presentation he emphasized, “The one thing that I need you to come away with today is that this is a family business, and we are your neighbors. We are your 147th Attack Wing. We are your Texas Air National Guard. About 30 percent of our workforce are full-timers like me, but 70 percent of our great Texas airmen are right alongside of you in your schools, factories, stores, and hospitals. It’s a uniquely symbiotic relationship. We’re always hiring, and you know where to find me.”

The Ellington Field Joint Reserve Base is home to all branches of the Department of Defense as well as the Coast Guard and NASA, which includes approximately 7,000 full-time and part-time personnel. Barker explained, “We are the only major military presence in the third largest city in the nation – a city of over 80,000 veterans.” 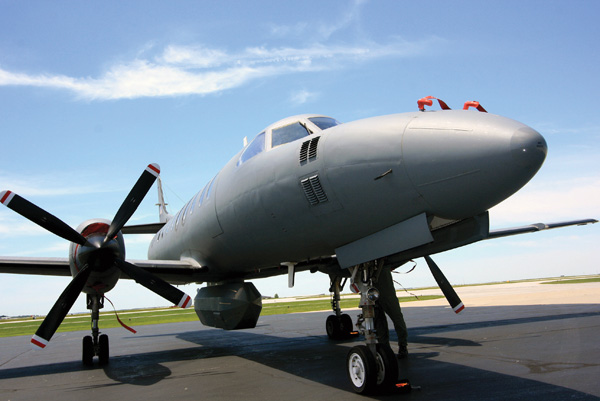 Barker then talked about Ellington’s MQ-9, a remotely piloted aircraft or RPA. He said, “From the operational side, it is flying local training missions and also has the capability to do combat operations anywhere in the world from Ellington Field. The MQ-9 is about the size of an F-16, a regular fighter airplane, and can carry about the same amount of bombs and missiles. It can stay up for upward of 12–15 hours without having to refuel. That makes a very flexible, a very capable weapon system. We are unique in that we are one of only three Air National Guard units that has both of those capabilities.”

Ellington Field is also the home of another flying asset – the RC-26. It was during Hurricane Harvey in 2017, the colonel said, that the RC-26 handled about 600 infrastructure requests from the city engineers to go to Barker Addicks Reservoir to look for areas that might be problematic. The MQ-9, he added, can also help out in that regard and has assisted other states during fire seasons. “Last year we flew an exercise with Tennessee regarding the numerous fault lines in that state. We launched our aircraft from Ellington and handed it off to Tennessee Air National Guard controllers. They flew a 10- or 12-hour mission doing those types of imagery and assessment requests that their state would require in the event of a natural disaster due to an earthquake.

“The RC-26 is what I fly. It’s a relatively small, but very capable, twin engine reconnaissance aircraft. Only the Air National Guard flies that airplane. We are one of only 10 states lucky enough to have it. In the past, we’ve done some good work helping our federal law enforcement partners on the border. Primarily what we have used it for is on counter drug missions. We have had great and quantifiable results in terms of some very large, high profile seizures.”

Barker also talked about Ellington’s Air Support Operations Squadron (ASOS) which is made up of battlefield airmen who deploy with the Army. They are able to bring combat air power to bear in the form of air strikes from joint attack aircraft for the maneuver unit commander. They are experts in close air support.

Barker detailed plans to improve the quality of life and infrastructure at Ellington. “The real excitement of Ellington Field JRB’s installation development plan shows that senior leaders outside of Texas in the Air National Guard and the Air Force think that Ellington and its missions have great longevity – enough to invest the thousands of dollars it takes just to write this plan so that we can link it to a disciplined and well thought out programmatic construction plan for what the next decades at Ellington Field are going to look like for whatever mission sets might come along.”

In 2024 the Air National Guard is going to find out where the next two F-35 bases will be located. The first two were awarded to Alabama and Vermont. The colonel stated, “We have a long history as a fighter unit; so, there’s the potential down the road that we could get one of those missions.”

There has also been much discussion and excitement about the future home of the U.S. Space Force headquarters. Gov. Greg Abbott has communicated to the president that Ellington Field should be a preferred location. Barker explained, “Those deliberations are complicated, and we are working with our municipal partners and the fact-finding team to the extent that it is appropriate.”

Barker then reported, “On July 29th the Secretary of Defense announced that AFRICOM (the U.S. Africa Command) headquarters in Stuttgart, Germany, which is the major combatant command for any operations by any U.S. military unit in or supporting or touching the African continent, is moving from Stuttgart to a location to be determined. Ellington Field has long been discussed as a candidate for Headquarters AFRICOM. We’re excited to watch those developments.”

Following the colonel’s presentation, he answered several questions submitted by the virtual attendees. To view the virtual general membership meeting, go to www.youtube.com/watch?v=WP6A_tCRGNM&feature=youtu.be.