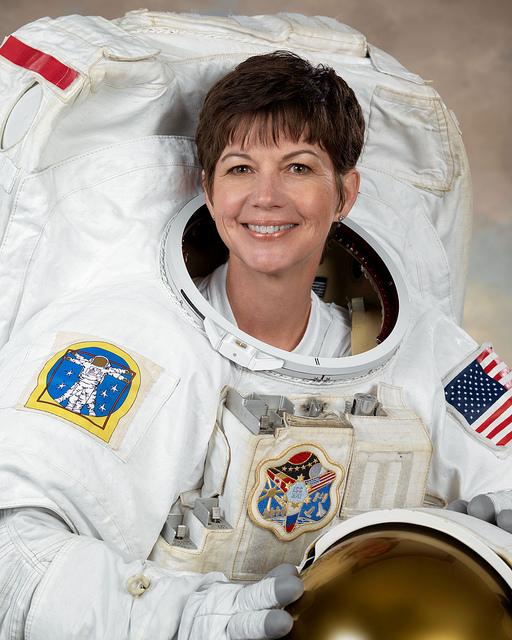 After 24 years and three trips to space, astronaut Cady Coleman left NASA on Dec. 1. During her time at NASA, she flew on two space shuttle missions and spent six months aboard the International Space Station.

“Cady always brought a great deal of enthusiasm to her work here,” said Chris Cassidy, chief of the Astronaut Office at NASA’s Johnson Space Center. “We wish her the best in her future endeavors.”

Coleman, a retired colonel in the U.S. Air Force, was born in Charleston, S.C. She earned a bachelor’s degree in chemistry from Massachusetts Institute of Technology in 1983 and a doctorate in polymer science and engineering from the University of Massachusetts in 1991.

Commissioned as a second lieutenant in the U.S. Air Force, she worked as a research chemist at Wright-Patterson Air Force Base before being selected as an astronaut in 1992.

Coleman’s first journey to space came as a mission specialist in 1995, when space shuttle Columbia carried the U.S. Microgravity Laboratory into space for its second mission on STS-73, a precursor mission to the space station. She returned for STS-93 in 1999, also on Columbia, as the lead mission specialist for the deployment of the Chandra X-ray Observatory.

Chandra is still being used to detect X-ray emission from very hot regions of the universe, such as exploded stars, clusters of galaxies, and matter around black holes.

In December 2010, Coleman launched into space for a third time onboard a Russian Soyuz rocket, for a six-month stay onboard the space station, serving as the lead science officer, lead robotics officer and flight engineer for Expedition 26/27. Coleman provided onboard supervision of more than 100 science and technology experiments aboard the station. In addition, she and the Expedition 26/27 crew hosted a record number of visiting vehicles, including two space shuttles, three Russian Progress supply ships, a European Automated Transfer Vehicle and a Japanese H2 Transfer Vehicle.

Coleman spent a total of 180 days space. During her time on the ground at NASA, she served in a variety of roles within the Astronaut Office, including chief of robotics, lead for tile repair efforts after the Columbia accident and lead astronaut for integration of supply ships from NASA’s commercial partners, Space X and Orbital ATK. Most recently, she led open-innovation and public-private partnership efforts for the Office of the Chief Technologist at NASA Headquarters.