Arthritis doesn’t play favorites; it strikes both young and old 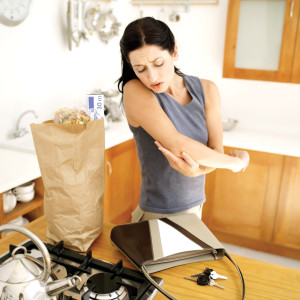 Arthritis. Most everyone gets it at one time or another in one form or another. It’s not choosy.  It isn’t just an old folks’ malady; it attacks both young and old.

And there is no cure. Just discomfort that generally can be managed with the right medicine.

It may come as a surprise to some, but there is more than one kind of arthritis. And, an estimated 27 million Americans have the most common form of the disease.

Still another form of the disease is gout.

Whatever form it takes, it sometimes comes with pain and stiffness that can be so severe it makes it difficult to walk, sleep, climb stairs or perform many daily tasks. Common risk factors include advancing age, previous joint injury, obesity, overuse of a joint, weak thigh muscles and genetics.

Although the exact cause of osteoarthritis is not known, there are several factors that are known to put someone at risk of getting it.

“We know that genetics plays a role, so it tends to run in families. We know that obesity is a factor for worsening the arthritis, particularly in the lower extremities. We know that if you injure the joint, such as torn cartilage or a fracture to the joint, that can predispose arthritis,” said Dr. Melvyn Harrington, associate professor of orthopedic surgery at Baylor College of Medicine in Houston.

Common symptoms, which may develop gradually, include:

While it’s not a reversible condition, it is manageable with medications.

“For every pound you see on the scale, your knee carries three or four times that weight. Every little bit of weight loss helps, especially for arthritis in the lower extremities,” he points out, adding that new research has shown that excess body fat can produce chemicals that can cause more pain and joint damage.

Rheumatoid arthritis usually begins between ages 25 and 50 when the immune system attacks parts of the body – primarily joint linings which are supposed to protect and lubricate joints. When it attacks these membranes, they become inflamed, causing joints to become painful and swollen or stiff.

Over time, the joint may be destroyed. The disease may come on suddenly or over time, often starting with the small joints in the wrist, hands or feet, causing a general feeling of fatigue and aching muscles.

While doctors can successfully transplant hearts, separate Siamese twins and restore hearing to the deaf, they have no cure for osteoarthritis.

They do, however, have medications to help relieve pain, when needed. Physical therapy may be recommended for improvement of strength and function. “Exercise can improve range of motion and also strengthen the muscles surrounding joints,” the Mayo Clinic points out in a special report, adding that “in some cases, splints or braces may be warranted.”

Surgery may even be considered if the pain is severe and daily activities and mobility become difficult. Doctors may suggest that a damaged joint, such as the hips or knees, be replaced with an artificial one. In sum, one may need to try several different treatments or combinations of treatments, the Mayo Clinic doctors suggest.

A variety of medications are generally used by physicians to treat arthritis, depending on the type of  arthritis. A list prepared by the Mayo Clinic includes:

Analgesics. These are commonly used to help reduce pain but have no effect on the inflammation and include acetaminophen (Tylenol), tramadol (Ultram), plus narcotics such as oxycodone and hydrocodone.

Nonsteroidal anti-inflammatory drugs.  NSAIDs reduce both pain and inflammation. Over-the-counter drugs in this class include ibuprofen (Advil, Motrin IB) and naproxen sodium (Aleve). Others are only available by prescription. Some may cause stomach irritation and some may increase one’s risk for stroke or heart attack. NSAIDs also come in creams or gels, which can be rubbed on joints.

Counterirritants. There are ointments that contain menthol or capsaicin, the ingredient found in hot peppers. Rubbing these on an aching joint may interfere with pain signals from the joint.

Corticosteroids. This includes both prednisone and cortisone, which reduce inflammation and suppress the immune system.

Posted on Sunday, March 1st, 2015 at 7:45 am | Category Health | Tags: Arthritis, Types of arthritis, What kinds of arthritis are there?| Comment |