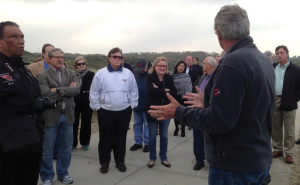 A 42-member delegation from southeast Texas embarked on a second fact-finding trip to The Netherlands in late September, in order to gain a better understanding of how a coastal barrier system such as the Netherlands’ Delta Works project could protect the Galveston Bay area from horrendous hurricanes.

The Delta Works project in the Netherlands is a massive chain of flood protection structures constructed after the North Sea flood in February 1953 that drowned 1,835 people.

It is the largest storm barrier system in the world. The project was completed in 1997, and the risk of flooding was reduced to one in 4,000 years. The barrier system has worked on numerous occasions to protect the delta, which is especially prone to flooding during the spring tide.

Bob Mitchell, president of the Bay Area Houston Economic Partnership, was a member of the delegation. He said, “Everything that we learned while on the trip just further strengthened our belief that a system like the Ike Dike concept would safeguard our families and industries well into the future.”

« Rocket scientists aren’t the only ones with talent
Port of Houston: Impossible dream turned into a reality »
Bay Area Houston Magazine