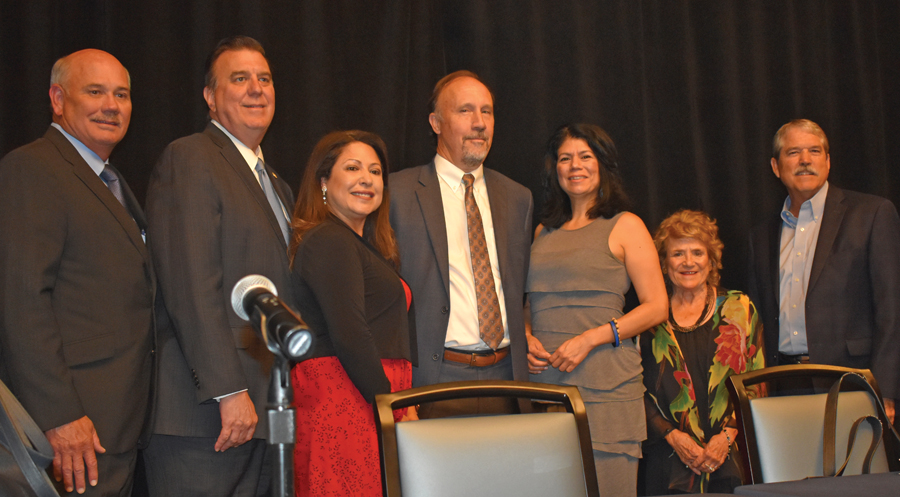 Politicians always like it when they have good news to share with their constituents, so it was no surprise our Bay Area legislators were wearing big smiles when they arrived for the Bay Area Houston Economic Partnership Legislative Update, hosted by BAHEP’s Political Protocol Committee.

Sens. Larry Taylor and Carol Alvarado, along with Reps. Dennis Paul and Mary Ann Perez had all played a role in the historic school finance reform, as well as property tax reform, and all appeared pleased with the results.

Senator Taylor, in fact, was chairman of the Senate Education Committee, which led the drive to put more money into public schools. Legislators also voted to pay for prekindergarten for low income students, provide pay raises and other benefits for teachers.

“We brought down your tax, probably about seven cents the first year and five the next,” he told the crowd at South Shore Harbour Resort, going on to explain that schools will get the same amount of money but property taxes will go down – which will help in the future.

“What we did for education is huge,” he added. At which Senator Alvarado told the crowd she wanted to give a shout out to Senator Taylor, “because he made it happen.”

“Finally,” Dennis Paul, interjected, “after two sessions, we made it happen.” To which, Mary Ann Perez added, “we all worked together.”

“This,” Alvarado said, “was one of the most productive legislative sessions ever.” In all, the four covered a wide variety of subjects – Hurricane Harvey legislation, development of the Spaceport, the Battleship Texas, border security funding, school safety and the Texas Ship Channel among them – for their audience at the July 23 meeting.

As for the battleship, “it needs to stay where it is,” Perez said as the meeting came to an end.

All four seemed surprised on hearing that TxDOT might hold up work on the Grand Parkway. “This would be huge for our area,” Taylor said. (Later it was learned that work on the link to the Bay Area from what will be the third highway loop around Houston, will continue.)