An overview of the 2015 fishing season 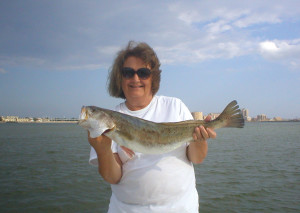 Anglers welcomed the arrival of April after a long, cold winter that kept all but the hardiest of fishermen off of the water.

What effects did the long winter have on fishing and how does the rest of the year size up?  We will take a look at all of this as far as fishing goes around the Galveston Bay Complex.

While there is a lot of good fishing during the winter, the majority of anglers fishing the Galveston Bay area are warm water fishermen.  For that group April has been the key month to get back in the battle.

A survey of local fishing guides indicated that trout action during the first quarter of this year was excellent.  A good number of quality trout, including some trophy fish in excess of nine pounds, were landed.  That news should be encouraging to trout fishermen who overall complained about lower catches than normal during 2014.

Several of the guides said that some of the best action took place during terrible conditions as cold fronts were blowing through.  While for the most part late afternoon wade fishing offers the best action, the mornings of the cold front arrivals were the times to be fishing.

The sustained cold water should have offered a big boost to last fall’s flounder spawn.  Cold water helps sustain the young hatch as they make their way back to the bays.

Looking ahead to warmer weather, April is considered the start of the saltwater fishing season in that it is at some point during this month that we see the first sustained 70 degree temperature readings in the surf.

Anglers refer to this as reaching the magic 70 degree mark.  The significance of this is that at that point and higher our summertime fish, including the migratory pelagic fish, start appearing.

April fishing is usually handicapped by gusty winds as the month has the dubious honor of being the windiest along the upper Texas Coast.  Still, during windows of fishable conditions a wide variety of fish are caught.

April is known for a big run of gafftop in the surf, and at some point during the month, the first ling appear in the surf and around the jetties.  The first jack crevalle of the year also appear and often are caught as far into the bays as the Galveston Causeway area.

As the year progresses, fishing will continue to improve with the incremental increases in water temperature.

Based on the winter trout action reported by the guides, the outlook for the warm months is excellent.  April and May often produce some of the largest trout of the year, and during the summer the school-sized trout start their aggressive feeding pattern.

One of the biggest encouraging factors for a good year of fishing is that we avoided a fish killing freeze this past winter.  While the season was long and cold, we did avoid a harsh winter like much of the north and east USA experienced.

One key to a successful year of fishing will be the amount of rainfall.  Salinity levels in the Galveston Bay Complex over the past several years have been high.  A balanced level of salt in our waters will do wonders to help fishing and the reproduction cycle in the wetlands.

April should provide some excellent opportunities for outstanding fishing, if the wind allows.  During May, we have the first big run of speckled trout at the jetties, which should definitely make you feel like you are back in the battle.

Everyone is optimistic that 2015 will be better for fishing than last year.