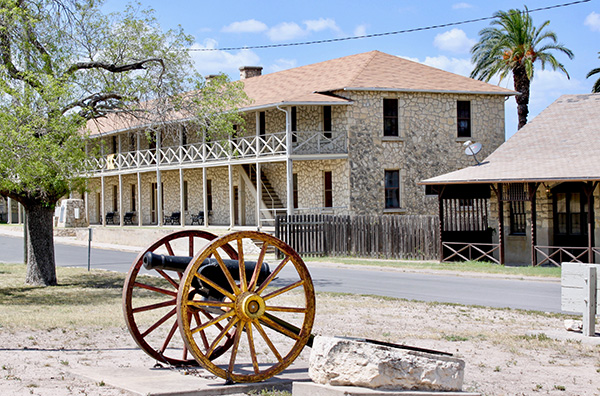 We had made the long trip out highway 90 in hopes of visiting Alamo Village, the set of John Wayne’s movie, The Alamo. In spite of its diminutive size, Brackettville has been the set for many movies and TV shows. It has that perfect southwest look that movie people are after.

The Wayne film and Disney’s Davy Crockett at the Alamo had a lot to do with my initial interest in Texas as a kid, so when someone told us the movie set was open to the public for touring, we said, “Why not?” What they failed to tell us was that since 2009, you could only get in if you rented the place . . . all of it. Apparently, it is popular for weddings and for people doing films. When we got there, we found the gate locked. Since we had come all this way, we wanted to do something. We decided to take a look at Fort Clark,

Fort Clark was home to the buffalo soldiers and the black Seminoles during the Indian wars. It has a few interesting buildings and a museum, but the real treat for us was a nice set of Jeep trails through the prairie. We spent the day there driving and hiking.

After a few hours of fun, we were hot and thirsty. Unfortunately, Brackettville, and in fact all of Kinney County, is pretty much a “bring your own” kind of place. There are no fast food options. Beer was, of course, out of the question but after a hot day in the sun, even a Coke Zero would do. But we were in Brackettville. So we tried the last, and in fact, only resort in town—the Dollar Store. Lo and behold! They had beer! Small town people are so resourceful.

When we got up to the check-out counter, there was quite a ruckus going on. A young man, probably about 30, was practically on his knees, begging.

The checker told him he would have to go to Uvalde or Del Rio. She had no magnets in the store. Del Rio is 30 miles away; Uvalde is 40. He was not at all happy with either prospect. He left, dejected but polite, and after paying, we went out to the Jeep and saw him standing next to a truck, just staring at the ground. I couldn’t resist. I asked why he needed a magnet, and so desperately. He just spit out the words, “Baby-proofing.” I was intrigued and the conversation was underway.

The technology on baby-proofing has changed in the last few years.  They now use magnetic locks that require little magnet “keys” to open the cabinet doors and drawers.  To break into these things, you have to place the key in just the right spot.  That can be confusing if we are talking about the usual kitchen with dozens of doors and drawers.  And then there are the bathrooms. So he said he and his wife decided to use colored sticky dots on the outside of the doors and drawers to identify the exact spot where the magnet had to be placed to release the lock. It had been a disaster from the start.
“One day last week,” he said, “one of those dots started to peel off and my wife decided to replace it. She pulled it off the rest of the way, only to find that the glue in the dot destroyed the finish of the cabinets.”

“By now I am starting to think baby-proofing was a monster mistake,” he said. “My first thought was that I need to refinish that drawer front. But my wife convinced me to wait till the kids are old enough to stop gouging and carving the cabinets and then fix or replace them all at once.”

“Then, this afternoon after work, I went to a drawer to get a baby spoon to feed the kid.  But the magnet key was nowhere to be found.  I asked my wife if she had it somewhere.  No.  So I spent the next 20 minutes looking for it everywhere I could think of.  I know it was there when I got home because I used it to open the drawer I put my truck keys in.”

As he went on, his story got even more sad.  He asked his wife when was the last time she had seen it.  She said she used it when she went into one cabinet to get a frying pan and into another to get the dishes for dinner.

“I figured that she must have laid it down inside the cabinet while she was fiddling with the dishes,” he said.  “I asked which cabinet she went to last.  She doesn’t remember.”

He went on to describe how he went out to the garage and got a couple of screwdrivers. He began taking off the cabinet doors.  He started with the dish cabinet because it was easier to reach since the pan cabinet is under the stove.  No luck.  He took off the second door.  Still no luck.

Rather than take off every door, he decided to go to the dollar store and buy a magnet, any magnet.  Inconvenient, but better than tearing off every door in the house.

“I live about two and a half miles from here, so I went to get my truck keys.  Of course, I couldn’t open the drawer my keys are in unless I have the ‘key,’ and taking drawers apart is way more work than taking off a door.”

So then he walked to a neighbor’s house and borrowed his truck.

“I told him it would be just a ten minute trip. Now I have to go back and ask permission to take it all the way to Del Rio, easily two hours.”

I’m sure by now he understood it was time to remove those evil child-proof devices.  To open most of them (especially the toilet seats) you need a kid about four to show you how it is done.  It is like the first child-proof lids on pill bottles. Remember those? Only kids could open them.

In spite of his anguish, I have to tell you, it was pretty funny to hear him tell the story. It reminded me of a sitcom episode I saw a few years ago that offered a solution. If you have baby-proofed your house, burn it down and rebuild from scratch.

I managed to wait until he drove away to break out laughing hysterically. But it was a valuable lesson. I’m sure glad it was him and not me—and I intend to keep it that way. Grandbabies or not!