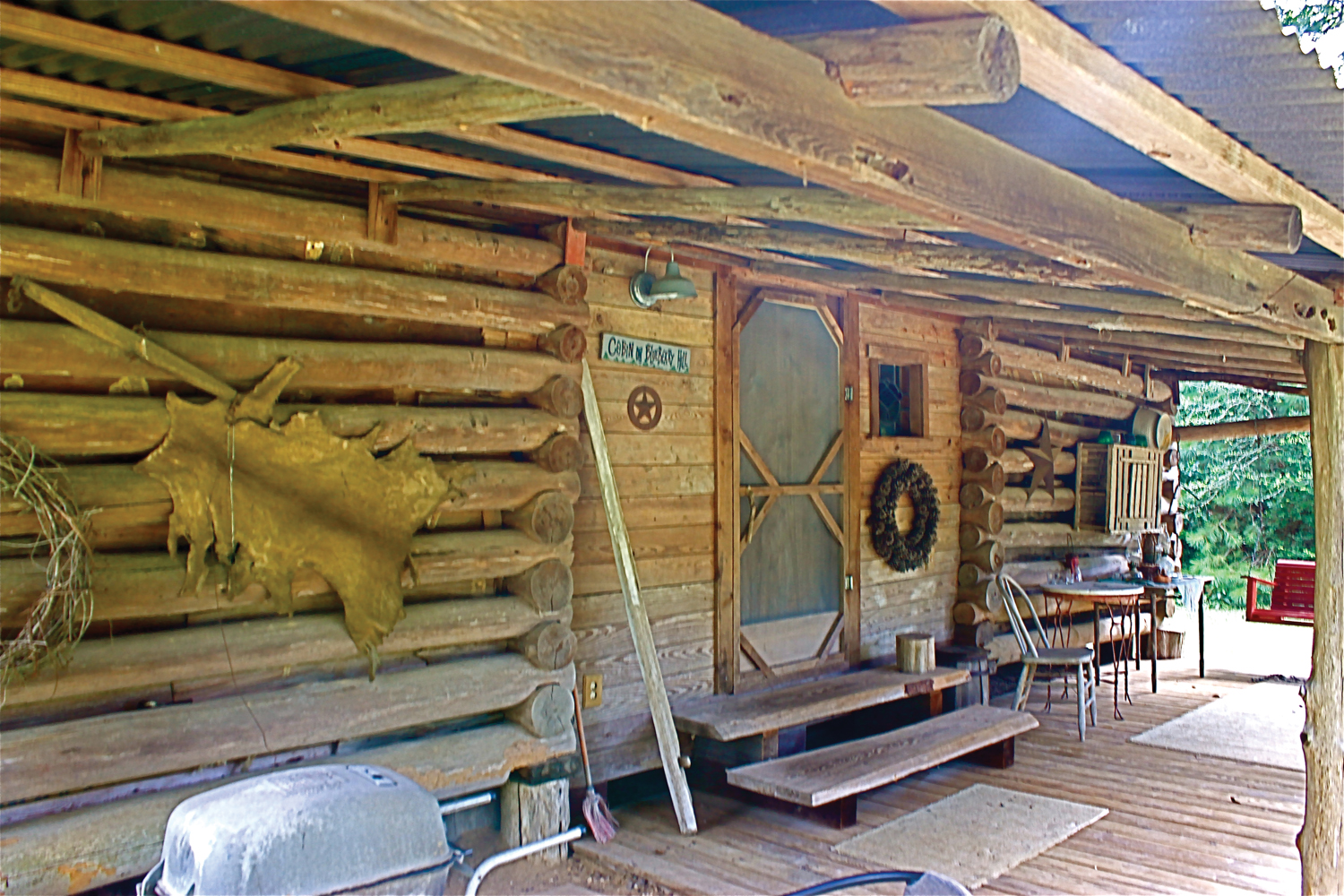 Sometimes I think I was born 150 years too late.  It seems like most of the things that I love were from another era—a time when the world was more pure and life was simpler.  I guess it shows in the way I live my life.

We had selected Kountz to be our base camp for a few days.  It was centrally located to many of the park properties on the south end of the Big Thicket where we planned to explore.  We had read about a bed and breakfast there that consisted of a few log cabins scattered throughout the woods.  It sounded like my kind of place, so we jumped at the opportunity.

I have always been fascinated by the past.  I think you could even go so far as to say I romanticize it to some degree.  I suspect most of us do.  After all, every society on earth has as part of its myth package the archetype of the garden.  Basically, this is an image of Eden, when the world was young and completely unspoiled.  In most cases, that archetype shows up in a society’s art and entertainment as an image of the wilderness.  In desperate situations, when all wilderness is gone, we sometimes see it appear as a small, artificial copy of Eden—the planted garden, instead.  But wherever you go on earth, and in whatever time period you choose to examine, the image of the garden is there.  Carl Jung says all societies share this archetype because deep inside, we all have a suspicion that life was better in the past than it is today.

From the time I was in early grade school, I fantasized about living in a teepee or a log cabin.  I guess today that manifests itself in the places I choose to stay when on the road.  In San Antonio, I skip the Riverwalk hotels in favor of the Menger.  In Austin, I bypass the high-rises in the Arboretum in favor of the Driscoll.  And my favorite hotel of all is the Gage in Marathon.  In small towns or out in the country I look for old log cabins.  I’ve even stayed in a stone cabin built by the CCC.  When I stay at places like that, I always feel closer to the earth and to the old days, the days that feel right for me.

For the most part, I think that is harmless.  After all, things were indeed better in the past.  The world was more pristine, less developed and people seemed to have a greater sense of morality.  Life was slower; we lived and worked in the same place, or at least in close proximity and as a result, children had role models of both sexes every day when growing up.  We even had free speech back then.  Ah, yes…the good old days.  And if you think about it, some of us even romanticize our own, not-so-distant past—our glory days.  The fact is, dwelling on the past can be pleasant.  The time spent there makes us happy.  And isn’t that the purpose of life?

But sometimes I wonder if the old days were really that much better than today or if maybe that’s just the way we choose to view them looking back.  I do know most of us share the tendency to see them that way.  In fact, this idealized view of the past is not even unique to our own time.  Back in the 19th century Judge Roy Bean was becoming increasingly disenchanted with the “progress” that was coming to the lands West of the Pecos.  He saw it as ruining the life he knew and loved.  It got so bad that, when he finally couldn’t take it any more, he went on a three-day binge and drank himself to death.  He just couldn’t reconcile who he was as a human being with the dystopian life he believed was coming.

And yet, in spite of the fact that humans all tend to share this idealized view of the past, do any of us really want to live there?  On this afternoon in Kountz, I pulled up to the cabin in the woods in a Jeep, not on a horse.  It was July; I was delighted that the cabin was air-conditioned and had ceiling fans over the beds.  Last year when I had pneumonia, I was thankful for antibiotics.  And I often wonder if I could really be as happy if I couldn’t spend Saturday afternoons watching Purdue football and basketball games on TV here in Houston.  None of that would have been possible in the 1850s.

I guess no era is perfect—but some times were definitely better than others, so what do I have to lose by indulging my longings?  If I prefer Baroque music and the French Impressionists or cowboy poetry and Elmer Kelton novels to their modern counterparts, no one is hurt by it.  Why not dwell on the good old days gone by?

Some would point out that the time we spend thinking about the old days is time that can be used in more productive ways.  That doesn’t seem like a very good argument against the practice to me.  That very thought is a part of the problem with life today.  The idea that hard work and a fast pace are what is required in life is what some philosophers have called the “Western Disease.”  (To be fair, others have called it the “Western Glory.”)

The fact is, though, we may indeed be harmed by our romanticizing of the past.  Think about this: the more time we spend lamenting and idealizing a world long lost, the less satisfied we are with our present world. Even more important perhaps, the time spent dwelling on the old days is time we can’t be in the present.  If there is one thing certain, it is that the present is where our lives are lived.  If I’m not in the now, not satisfied with my present, how can I be happy?

After a couple of nights in the cabin and a couple of days walking around the Big Thicket, it was time to head back home, back to my life in the present.  I wasn’t sure I was ready for what was waiting for me there. I wasn’t sure I ever would be.   But I knew it had to be done.

Sometimes I have to remind myself that the past is another country.  They do things differently there.  But is different necessarily better?  The truth is, I’ll probably continue idealizing the past to some degree, but at the same time, I suspect I would be better off if I could accept it for what it is, a pleasant distraction to be engaged in every now and then, and choose to actually live in the now, full-time.