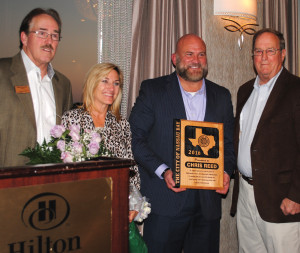 Outgoing Nassau Bay City Manager Chris Reed and his wife Jana, center, are all smiles as Mayor Mark Denman, left, and former Mayor Don Matter, present him with a plaque honoring him for his years of service to the city. Reed is opening a government affairs consulting business to assist Texas cities.

NASSAU BAY said farewell to retiring City Manager Chris Reed at a big goodbye party in the Hilton’s Marina Ballroom, which was overflowing with well wishers he had befriended over the years. 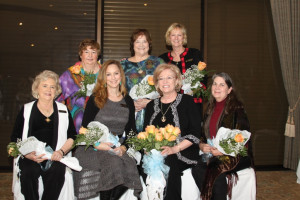 THE LAKEWOOD Yacht Club Ladies Association has a new president – Jan Smith, who was installed Friday, Jan. 15, at the annual installation luncheon.

Plus, about a dozen past presidents such as Anna DeWald, Sandy Lewis, Rita Matthews, Evey Leavens, Sue Warters, Roz Clayton and Judith Shaw, to name a few.

DR. CHARLES ELACHI, director of NASA’s Jet Propulsion Laboratory, has been named the recipient of the 2016 National Space Trophy, which is awarded annually by the Rotary National Award for Space Achievement (RNASA) Foundation.

It will be presented at the 30th annual RNASA Gala Friday, April 29, at the Hyatt Regency Hotel in downtown Houston.

The public and aerospace community are invited to attend the black-tie event. This year will be RNASA’s 30th annual National Space Trophy Banquet. Visit www.rnasa.org/tables.html to reserve a table for the banquet and find information about sponsorships and tickets. To reserve a room at the Houston Hyatt Regency, visit http://www.rnasa.org/houston.html or call 713-654-1234 and request the RNASA group rate.

Rodolfo Gonzalez, president of the RNASA Foundation said, “The Foundation is very pleased with the board of advisors’ selection of Dr. Elachi and is looking forward to recognizing him as the guest of honor at the RNASA Space Awards Gala.”

Dr. Elachi was nominated for the award by A. Thomas Young, former director of NASA’s Goddard Space Flight Center. Young said, “Charles Elachi’s distinguished leadership and sustained technical achievement has had a profound impact on the U.S. robotic exploration of space across the late 20th and early 21st centuries…His contributions and vision have impacted space science and technology, generations of young people and professionals, and society at large.”

Dr. Elachi said, “I’m honored to receive the National Space Trophy from this prestigious organization. I feel so fortunate to be involved in space exploration during an extremely exciting time, when we are rewriting science books, fulfilling humanity’s innate quest for discovery, and bringing tangible technology and science advances back to Earth. I am grateful for the invaluable contributions of the teams of dedicated and immensely talented men and woman I’ve worked with through the years.”
RNASA was founded by members of Space Center Rotary of Clear Lake.