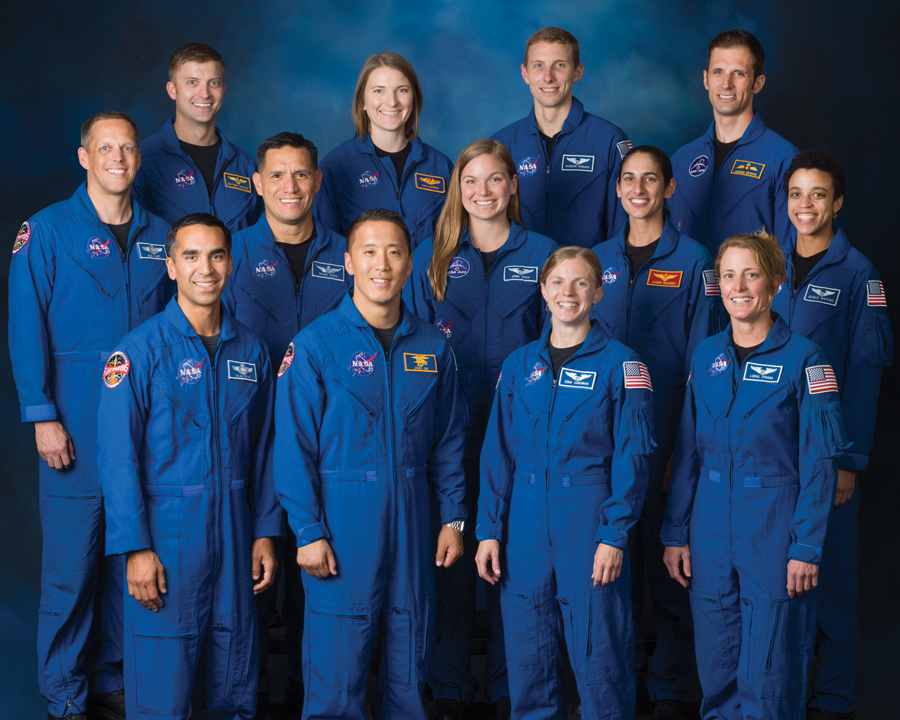 NASA welcomed 11 new astronauts to its ranks Jan. 10, increasing the number of those eligible for spaceflight assignments that will expand humanity’s horizons in space for generations to come. The new astronauts successfully completed more than two years of required basic training and are the first to graduate since the agency announced its Artemis program.

The new graduates may be assigned to missions destined for the International Space Station, the Moon, and ultimately, Mars. With a goal of sustainable lunar exploration later this decade, NASA will send the first woman and next man to the surface on the Moon by 2024. Additional lunar missions are planned once a year thereafter and human exploration of Mars is targeted for the mid-2030s.

This was the first public graduation ceremony for astronauts the agency has ever hosted, and Sens. John Cornyn and Ted Cruz of Texas were among the speakers at the event.
Selected for training in 2017, the NASA astronaut candidates were chosen from a record-setting pool of more than 18,000 applicants.

NASA’s astronaut candidates are:
Kayla Barron, a U.S. Navy lieutenant, from Richland, Wash., who graduated from the U.S. Naval Academy with a Bachelor’s degree in Systems Engineering. A Gates Cambridge Scholar, Barron earned a Master’s degree in Nuclear Engineering from the University of Cambridge in the United Kingdom. As a submarine warfare officer, Barron served aboard the USS Maine and came to NASA from the U.S. Naval Academy, where she was serving as the flag aide to the superintendent.

Zena Cardman of Williamsburg, Va., completed a Bachelor’s degree in Biology and a Master’s degree in Marine Sciences at the University of North Carolina, Chapel Hill and was a National Science Foundation Graduate Research Fellow working at Pennsylvania State University. Her research focused on microorganisms and her field experience includes multiple Antarctic expeditions, and NASA analog missions in British Columbia, Idaho and Hawaii.

Raja Chari, a U.S. Air Force colonel, hails from Cedar Falls, Iowa. He graduated from the U.S. Air Force Academy with Bachelor’s degrees in Astronautical Engineering and Engineering Science and earned a Master’s degree in Aeronautics and Astronautics from Massachusetts Institute of Technology before graduating from the U.S. Naval Test Pilot School in Patuxent River, Md. Chari served as the commander of the 461st Flight Test Squadron and the director of the F-35 Integrated Test Force at Edwards Air Force Base in California.

Matthew Dominick, a U.S. Navy lieutenant commander, was born and raised in Wheat Ridge, Colo. He earned a Bachelor’s degree in Electrical Engineering from the University of San Diego and a Master’s degree in Systems Engineering from the Naval Postgraduate School in Monterey, Calif. He also graduated from the U.S. Naval Test Pilot School. Dominick served on the USS Ronald Reagan as department head for Strike Fighter Squadron 115.

Bob Hines, a U.S. Air Force lieutenant colonel from Harrisburg, Pa., has a Bachelor’s degree in Aerospace Engineering from Boston University and a Master’s in Flight Test Engineering from the U.S. Air Force Test Pilot School at Edwards AFB. Hines served as a developmental test pilot on all models of the F-15 while earning a Master’s in Aerospace Engineering from the University of Alabama. He has deployed in support of Operations Enduring Freedom and Iraqi Freedom. He also was a Federal Aviation Administration flight test pilot and a NASA research pilot at JSC.

Warren Hoburg, from Pittsburgh, earned a Bachelor’s degree in Aeronautics and Astronautics from MIT, and a Doctorate in Electrical Engineering and Computer Science from the University of California, Berkeley. He is a commercial pilot, and served on the Bay Area Mountain Rescue Unit and Yosemite Search and Rescue. Hoburg came to NASA from MIT, where he led a research group as an assistant professor of aeronautics and astronautics.

Dr. Jonny Kim, a U.S. Navy lieutenant, was born and raised in Los Angeles. He enlisted in the U.S. Navy, then trained and operated as a Navy SEAL, completing more than 100 combat operations and earning a Silver Star and Bronze Star with Combat V. He earned a degree in mathematics from the University of San Diego and a Doctorate of Medicine at Harvard Medical School. Kim was a resident physician in emergency medicine at Massachusetts General Hospital in Boston.

Jasmin Moghbeli, a U.S. Marine Corps major, considers Baldwin, N.Y., her hometown. She earned a Bachelor’s degree in Aerospace Engineering at MIT, a Master’s degree in Aerospace Engineering from the Naval Postgraduate School and is a distinguished graduate of the U.S. Naval Test Pilot School. Moghbeli came to NASA from Yuma, Ariz., where she tested H-1 helicopters and served as the quality assurance and avionics officer for Marine Operational Test and Evaluation Squadron 1.

Loral O’Hara was born in Houston. She earned a Bachelor’s degree in Aerospace Engineering at the University of Kansas and a Master’s in Aeronautics and Astronautics at Purdue University. Prior to joining NASA, O’Hara was a research engineer at Woods Hole Oceanographic Institution in Woods Hole, Mass., where she worked on the engineering, test, and operations of deep-ocean research submersibles and robots.

Dr. Francisco “Frank” Rubio, a U.S. Army lieutenant colonel, is originally from Miami. He earned a Bachelor’s degree in International Relations at the U.S. Military Academy at West Point, N.Y., and a Doctorate of Medicine from the Uniformed Services University in Bethesda, Md. Rubio has accumulated more than 1,100 hours as a Blackhawk helicopter pilot, including 600 hours of combat and imminent danger time. He served as a surgeon for the of the Army’s 3rd Battalion, 10th Special Forces Group at Fort Carson, Colo., before coming to NASA.

Jessica Watkins hails from Lafayette, Colo. She graduated from Stanford University in Palo Alto, Calif., with a Bachelor’s degree in Geological and Environmental Sciences, then earned a Doctorate in Geology at UCLA. She worked at NASA’s Ames Research Center and Jet Propulsion Laboratory and was a postdoctoral fellow at the California Institute of Technology, where she collaborated on NASA’s Mars Science Laboratory rover, Curiosity.

Canadian Space Agency’s astronaut candidates are:
Joshua Kutryk, a Royal Canadian Air Force lieutenant colonel, is from Beauvallon, Alberta. He has a Bachelor’s degree in Mechanical Engineering, as well as Master’s degrees in Space Studies, Flight Test Engineering, and Defense Studies. Prior to joining CSA, Kutryk worked as an experimental test pilot and a fighter pilot in Cold Lake, Alberta, where he led the unit responsible for the operational flight-testing of fighter aircraft in Canada.

Jennifer Sidey-Gibbons hails from Calgary, Alberta. She holds an honors Bachelor’s degree in Mechanical Engineering from McGill University and a Doctorate in Engineering from the University of Cambridge. While at McGill, she conducted research on flame propagation in microgravity. Earlier, she was an assistant professor in combustion in the Department of Engineering at Cambridge.