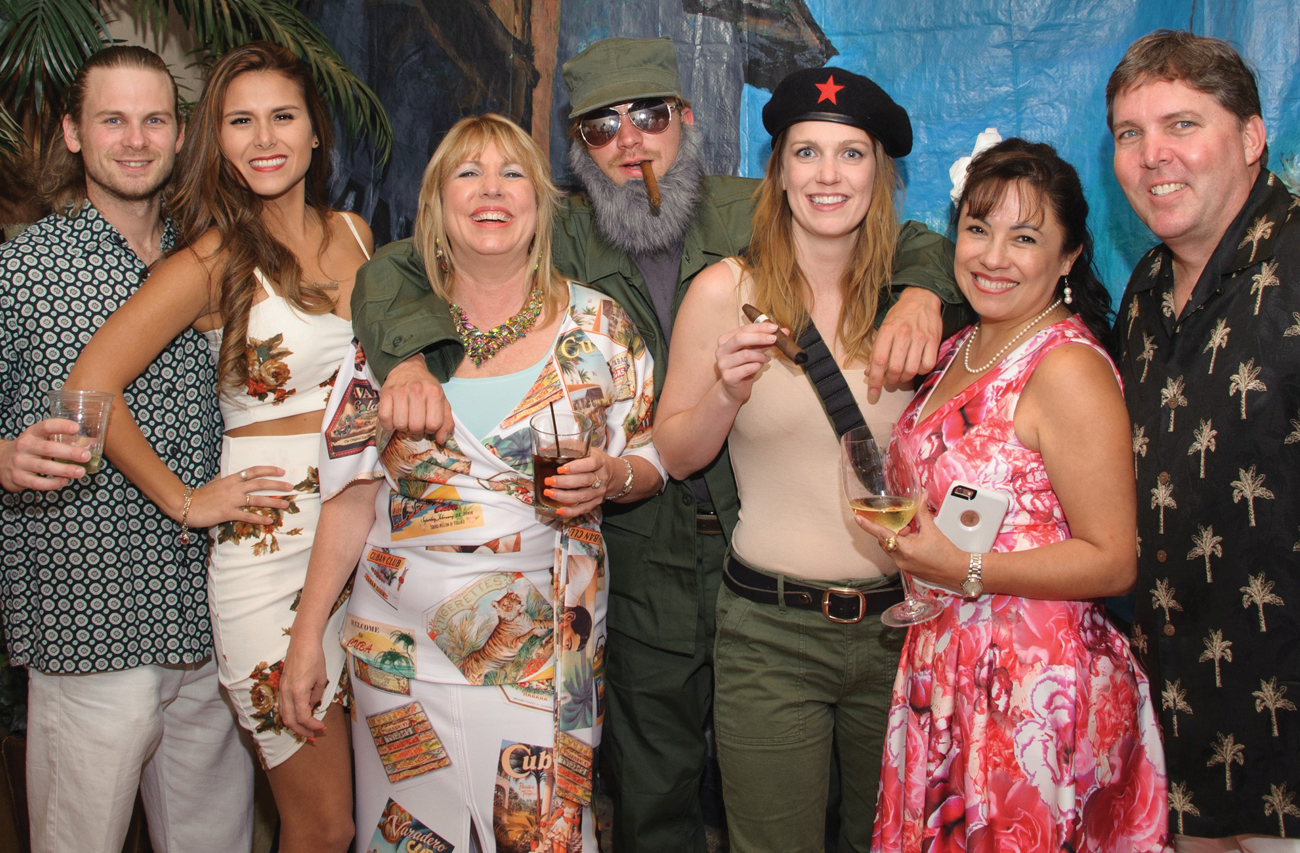 It’s not hard to tell that Austin Whitt, Gianella Cisneros, Merrill Crawford, Logan Whitt, Allison Cormier, Rocio and Clay Moore, from left, are having a great time at the Assistance League gala at the Golfcrest Country Club in Pearland.

ASSISTANCE LEAGUE members and their guests arrived with their passports at the Golfcrest Country Club in Pearland Saturday, April 9 and soon headed off for “A Night in Old Havana.”

Hillary and Paul Gramm are ready to party at the Assistance League’s Night in Old Havana Gala.

The annual gala, chaired this spring by Carol Latimer, Vicki Tallman, Pam Bungo, Katy Bastedo and Yvonne Perrin, is ALBA’s big fundraiser of the year and one of the Bay Area’s big fun nights of the year.

Besides all the partying and dancing, led by President Peggy Clause and her husband, Jerry, several awards were presented and Clear Creek ISD Superintendent Greg Smith, who came with his wife, Kathy, told the crowd about the importance of ALBA to the Clear Creek School District.

Proceeds from the event help fund Operation School Bell, Operation Cinderella and ALBA’s many other community outreach programs to improve the quality of life for at-risk populations. 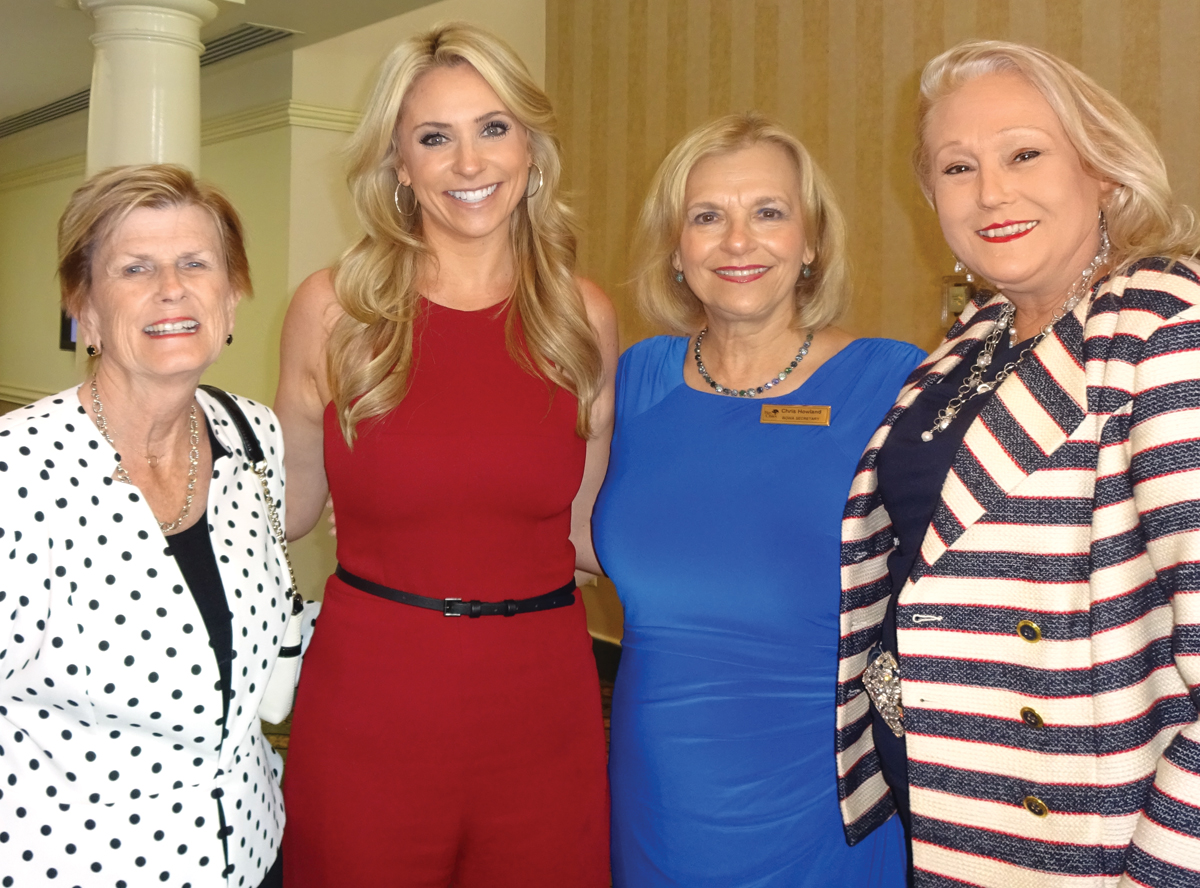 Ch. 11’s Chita Johnson, second from left, gets a warm welcome from Jennie Hampton, Chris Howland and her grandmother-in-law, Annette Snow Falks, from left, as she arrives to address the Bay Oaks Women’s Association luncheon at the country club.

Chita Johnson a hit with BOWA
CHITA JOHNSON was quite a hit when she presented the program for the Bay Oaks Women’s Association April luncheon at the country club.

The Ch. 11 weather prognosticator, who came to Houston from California in 2011, talked about her growing up years, schooling and how she became a meteorologist. Many were probably surprised to learn she is an avid traveler, has been skydiving over the Swiss Alps, river rafting down the Ocoee River in Tennessee and rock climbing in California’s Hume Lake.

Win Weber, a Clear Creek School Board trustee, shows off a casual outfit at the style show.

President Nancee Lynn and Ann Gay chaired the event – a celebration of spring and support for the club that provides so much for the Nassau Bay community — while Jenni Hudgins and Valerie Moses were in charge of the style show.

Proceeds will provide scholarships to students in horticulture and agriculture and used by club members for the upkeep of six different gardens in Nassau Bay, the Blue Star Memorial on NASA Parkway and for trees planted on Arbor Day. 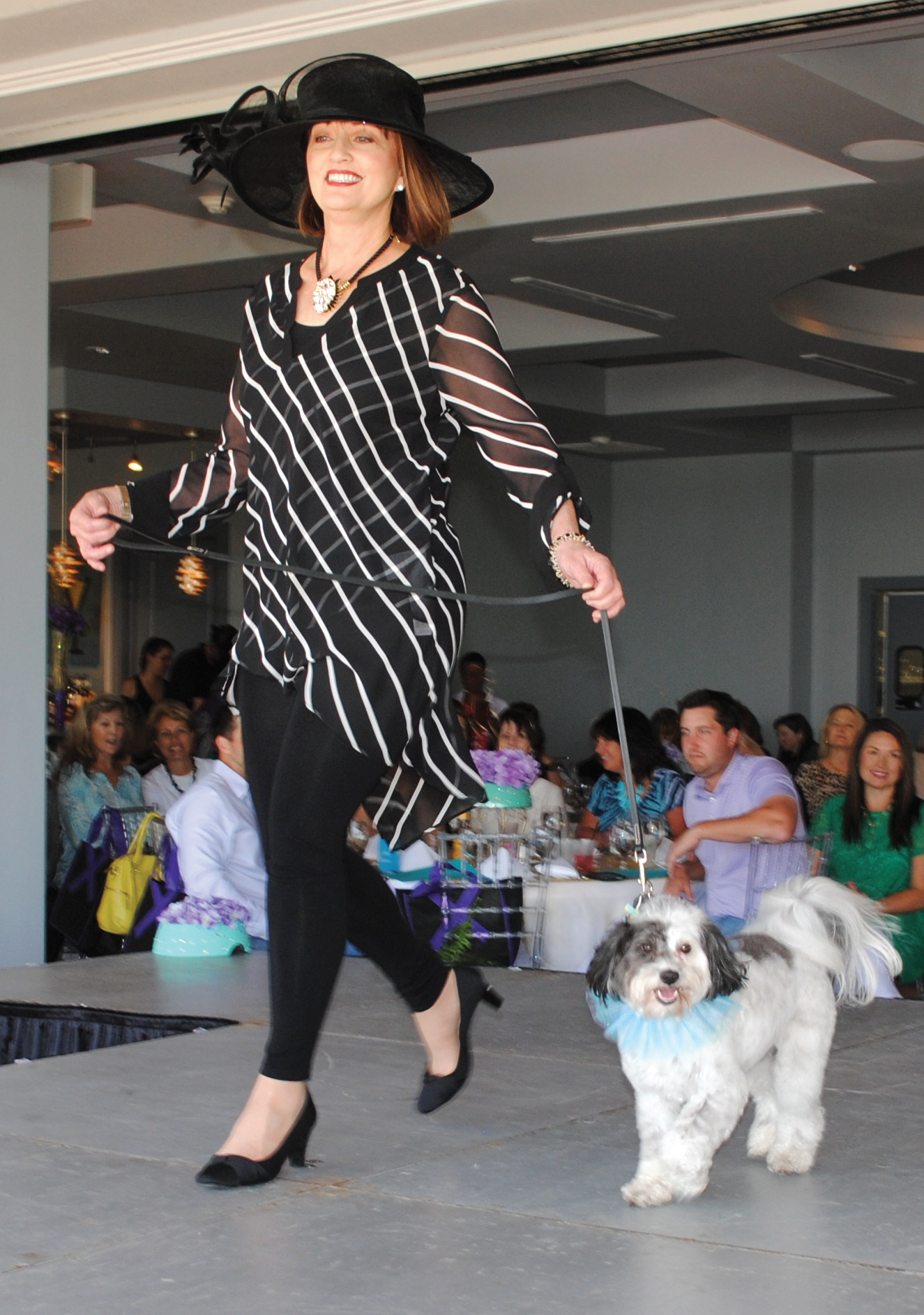 Dogs & Diva model and her companion come down the runway. Photo by Mary Alys Cherry.

Dogs ‘n Divas a fun afternoon
POOCHES ALWAYS liven up our lives, and they did once again when Bay Area Turning Point hosted the Dogs & Divas Fashion Show Luncheon at Water’s Edge on NASA Parkway.

Most performed remarkably well – even if we did occasionally hold our breath.